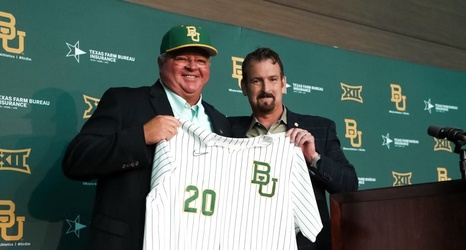 After being an assistant with Baylor baseball for nearly two decades, new head coach Mitch Thompson waited his turn and will now take the reins of the program. A true Baylor Bear at heart, Thompson was teary-eyed and grateful Thursday morning at the Baylor Club as part of his introductory press conference.

“Wow, God is good, and His timing is perfect,” Thompson said. “I’m so honored and humbled to be here … I’m so honored to be the new head baseball coach at Baylor University.”

Thursday’s event follows Thompson’s hiring, which was announced on June 15 following the resignation of Steve Rodriguez, who led the Bears for the last seven seasons.