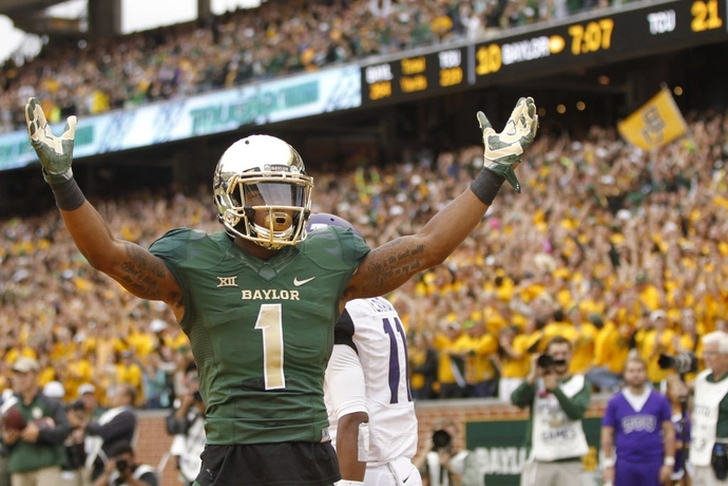 Baylor Bears wide receiver Corey Coleman has a chance to set a college football record this season. With 20 receiving touchdowns so far, Coleman is within striking distance of the single-season receiving touchdown mark. The mark is currently held in the FBS by Louisiana Tech's Troy Edwards and in the FCS by Jerry Rice. The Bears have four regular season games and a bowl game left, meaning Coleman has a great opportunity to set the record.

Coleman has caught 58 passes this season for 1,178 yards and 20 scores. He's third in the FBS in receiving yards and no other wide out has more than 14 TD passes. He's caught at least two touchdown passes in every game except the season opener this year. If Coleman keeps that two0TD streak up, he'll set the record during the regular season.

Baylor's next four games are against Oklahoma, Oklahoma State, TCU and Texas. Oklahoma has a sound secondary, which could pose a problem. However, they haven't played a WR of Coleman's ability yet this season. Baylor will score against OU, and Coleman can get two TDs against the Sooners. The Cowboys also have a solid pass defense and they did shut down TCU's air attack.

TCU and Texas should be easier opponents for Coleman to get two or more TDs. TCU's defense is plagued with injuries and Texas' defense is still very young. If Coleman doesn't keep his two-TD streak alive against the Sooners and Cowboys, he could make up for it in these two games.

There's also the bowl game for Baylor, or maybe a College Football Playoff appearance to give Coleman another chance at breaking the record. It's a record that has stood since 1998, but Coleman is on the verge of breaking it.