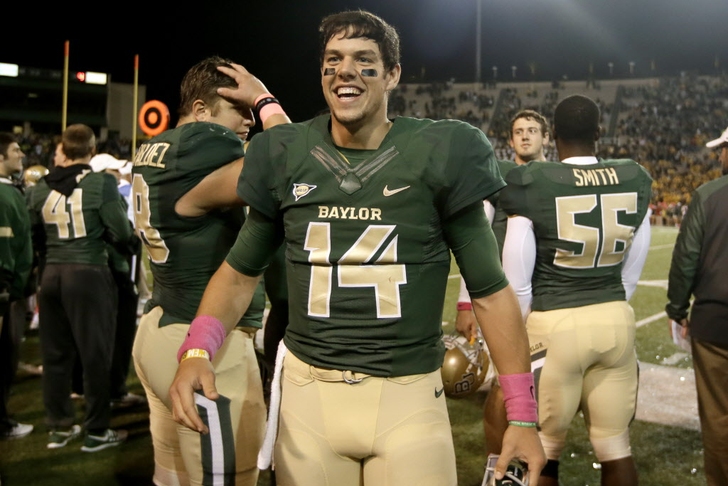 The Baylor Bears, with a chance at the College Football Playoff on the line, jumped out to a 24-14 half time lead, and held on to victory over the Kansas State Wildcats 38-27 to win a share of the Big 12 Championship with TCU, who Baylor defeated 61-58 in October. The Bears have one the Big 12 in back-to-back season seasons for the first time in school history.

Kansas State was also playing for a share of their second Big 12 title since 2012, but was not up to the task against a Bears team trying to make a statement to the Playoff Committee.

On a record setting night for in the careers of KSU QB Jake Waters and WR Tyler Lockett, the two hooked up on 14 catches for 158 yards and 1 TD but it wasn't enough as Waters threw an interception at the Baylor 20 yard line with 5 minute left, with the Wildcats down 11 points and mounting a comeback in hope

Without question, QB Bryce Petty was the star of tonight's game, throwing for 412 yards on 34/40 passing and 1 TD.

WR Tyler Lockett had an incredible night and now owns the all-time record at K-State for most career touchdown receptions, receiving yards and receptions and finished with 14 catches for 158 yards and 1 TD.

Back-to-back league titles for Baylor, their first time ever.

#5 Baylor will go to either the CFB Playoff or potentially the Fiesta Bowl or Orange Bowl if not selected.

#9 Kansas State ends the season 9-3 and will head to a bowl game, which will be announced on Sunday.