3 Reasons Why Baylor Is Guaranteed To Beat TCU This Year 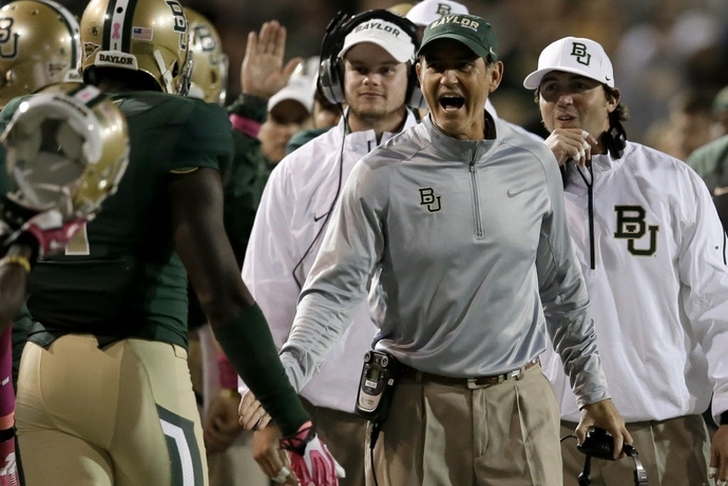 Baylor/TCU is one of the marquee rivalries in college football right now, pitting two programs at the height of their on-field and recruiting powers jockeying for Big 12 supremacy. This year's edition in Fort Worth is shaping up to be a College Football Playoff statement game, and we've got a VERY good feeling about who's going to come out on top of this one. Here's 3 Reasons Why Baylor Is Guaranteed To Beat TCU This Year.

Oakman is the most freakish athlete in the country at 6'9", and 280 pounds with tremendous strength and athleticism. He finally put all of his physical gifts together into pure production at the defensive end spot in 2014, making 51 tackles with 11 sacks and 19.5 tackles for loss. Baylor expects him to take another step forward this season, which would turn him from a player to watch to a certified top-ten NFL Draft pick. TCU/Baylor shouldn't be a defensive stalemate by any stretch. However, Oakman's mere presence alone will give the Bears' D enough of an edge to knock the Horned Frogs off in their own building.

Russell didn’t get much playing time in 2014, but he definitely made the most of it – he completed 48 of 85 passes for 804 yards, 8 TDs and 1 interception. It wasn’t against the kind of defenses he’ll face as a starter, but it definitely bodes well for the next man up in Baylor’s offense factory. Art Briles’ team isn’t losing very many impact players, and Russell is coming into what might be the most QB-friendly job in NCAA football. Baylor insiders have raved about Russell’s potential since he hit campus – if he proves them right, he’ll be much higher on this list.

Briles has taken the Bears from relative obscurity to one of the best college football programs in the country in such a short time, and they've reeled off three double-digit win seasons in the past four years. Baylor is only trending up, and Briles has the ability to lead them to the top of the college football world this season. His offensive wizardry helped Baylor edge TCU last year and there's no reason to think it won't happen again.