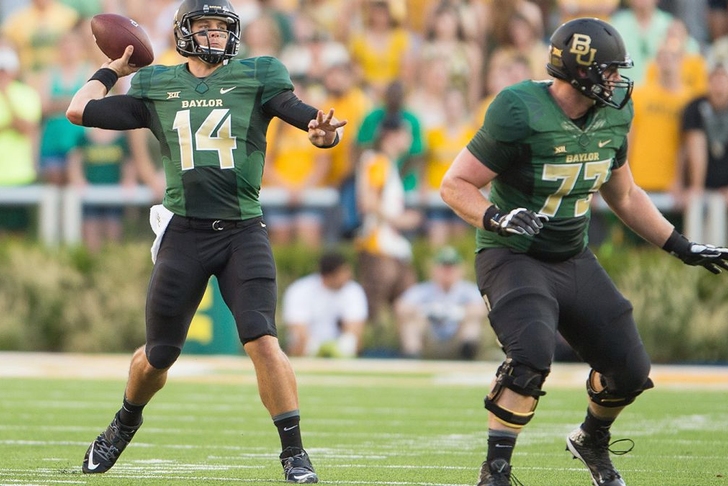 Decorated Baylor Bears quarterback Bryce Petty's graduation will be followed by a sure ticket to the NFL via the 2015 NFL Draft, after what was a historic career for the signal caller in Waco.

Whoever takes over for Petty under center will have huge shoes to fill, and we're here to break down what head coach Art Briles is terming as an open competition to become the heir to Petty's throne at McLane Stadium.

Sophomore QB Seth Russell has the experience edge over the two other candidates, and the reps he's taken in the offense so far could play a pivotal role in coach Briles' decision-making process in 2015. Backing up Petty over the past two years, Russell has had some moments that seem to highlight him as the QB of the future in Waco. However, he did struggle a bit in Baylor's 48-46 win over Texas Tech in November - his last action in 2014.

The second-year freshman is a dual-threat signal caller who was ranked by ESPN as the #5 QB in the Class of 2013. Johnson was also a decorated kick returner and basketball player in high school, and his legs and general agility could add a major wrinkle to the Bears' attack if he wins the job. There are questions about his accuracy and touch in the mid-to-long passing game, but if he can work out the kinks, he has the natural athletic ability to shine under the bright lights.

Here's the wild card. Five-star 2015 recruit Jarrett Stidham is the third-ranked dual-threat quarterback in his class per 247Sports, and possesses a near-complete package of throwing ability, quickness, and pure, unadulterated athleticism. His ceiling is unbelievably high and his talents lend nicely to a spread attack, but it's likely that he'll spend some time on the pine as a true freshman - especially with another dual-threat QB in Johnson ahead of him on the graduation track.