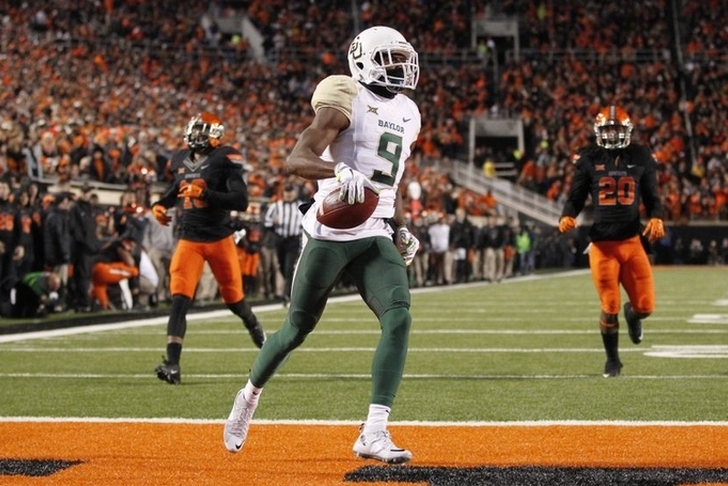 The #10 Baylor Bears bounced back from a crushing home loss to Oklahoma last week, knocking the #6 Oklahoma State Cowboys from the ranks of the unbeaten in a 45-35 win. Down to former emergency QB Chris Johnson, Baylor staved off a late push by OSU to pick up the huge win in Stillwater. Here's some notes, quotes and observations from the Bears' victory.

Baylor's win snaps an 11-game losing streak for the Bears at Oklahoma State. Baylor hadn't beaten the Cowboys in Stillwater since the 1930s.

Oklahoma State's running game was nonexistent. The Cowboys gained a net total of 8 rushing yards on 23 carries. Chris Carson led the team with 20 yards on the ground. QB Mason Rudolph did his best to make up for that, going 27 of 50 for 430 yards and three touchdowns in the loss.

The Bears ran a jaw-dropping 104 offensive plays on Saturday, 73 of those runs. Baylor posted 303 yards on the ground, and 396 yards through the air -- missing the 700-yard mark for total offense by a single yard.

Should we have seen this coming? Oklahoma State has given up less than 26 points just once in its last eight games. Their offense has been able to make up for that until tonight, but Baylor's a completely different offensive animal.

"We have 6 days. We have to go to work (Sunday). Go to Fort Worth Friday. We'll be ready. We've got a good football team." -- Baylor coach Art Briles on their Black Friday matchup with #18 TCU.

"We battled back. We got a couple stops on defense, and we couldn't get anything going on offense." -- Oklahoma State coach Mike Gundy.

"All those guys are old. They've won a bunch of games. We leaned on them. They played well and responded well." -- Art Briles on a big day for the offensive line.

"We didn't run the football effectively enough to give ourselves a chance." -- Mike Gundy

The Big 12 is an absolute mess right now. One week after getting run out of Waco in a 44-34 home loss to the #7 Oklahoma Sooners that knocked them from the ranks of the undefeated, the Bears pulled off a similar upset of the formerly-unbeaten Cowboys. Oklahoma, Oklahoma State and Baylor are all one-loss teams with their each of their defeats coming in conference. The Big 12 title race is a mess, and the College Football Playoff committee's task of differentiating these teams is going to be insanely hard.

We'll have to keep an eye on Baylor QB Jarrett Stidham's injury status this week. He couldn't answer the bell in the second half after suffering an ankle injury in the first 30 minutes. Chris Johnson did a fantastic job in his stead, but Baylor's remaining games against TCU and Texas will take on a completely different color if Stidham becomes the second Bears QB to fall victim to the long-term injury bug.