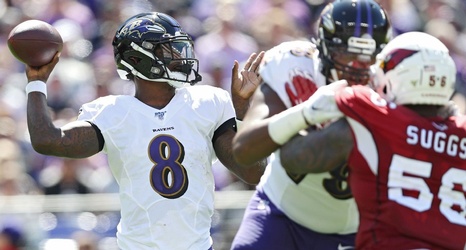 BALTIMORE -- On a day when Lamar Jackson produced his most rushing yards in a game, the Baltimore Ravens' 23-17 win over the Arizona Cardinals came down to a throw and a team's belief in its quarterback to deliver that clutch pass.

Jackson's perfectly thrown 41-yard strike to Marquise Brown in the fourth quarter Sunday reverberated more than his five touchdowns and perfect passer rating a week ago.