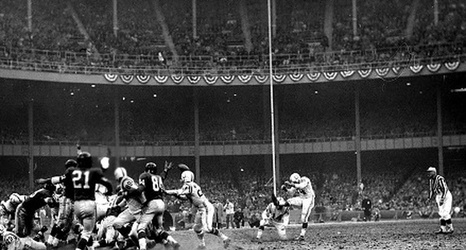 The Touchdown toss from Johnny Unitas to Raymond Berry in the 1958 NFL Championship game has been passed again. This time, the receiver paid dearly for it.

In the game that still resonates some half-a-century later, Unitas hit Berry for a 15-yard touchdown in the 2nd quarter to put Baltimore up 14-3. The ball was used for the Steve Myhra extra point and remained in the stands.

This is that ball.

Having exchanged hands a number of times, it would up at Huggins and Scott Auctions in Maryland. It was bid on for about ten days at the beginning of this month and sold for $62,140.