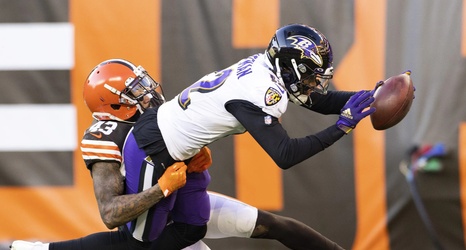 After trading wide receiver Marquise “Hollywood” Brown to the Arizona Cardinals during the draft, the Ravens signaled a passing of the torch to sophomore wideout Rashod Bateman. Though the baton pass was forced by Hollywood’s request to play elsewhere, it was passed nonetheless, and the Ravens are confident in Bateman becoming the next receiving star on offense.

“We took ‘Bate’ [Rashod Bateman] last year; he was our first-round guy, and I think he’s going to show you why,” Ravens General Manager Eric DeCosta said after Day 3 of the NFL draft.

DeCosta isn’t the only one expecting big things out of Bateman, as NFL.