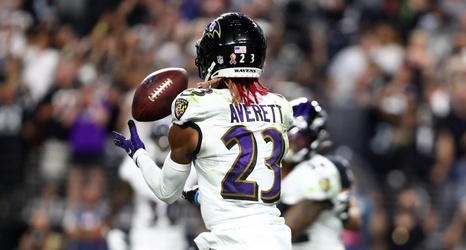 The Baltimore Ravens suffered a demoralizing overtime defeat in Las Vegas on Monday night. The Raiders outgained the Ravens 491 to 406, won time-of-possession by nearly two minutes and earned a two to one advantage in the turnover battle.

Poor blocking on the offensive line contributed to both of Lamar Jackson’s fumbles. Ronnie Stanley, Bradley Bozeman, Kevin Zeitler and Alejandro Villanueva lined up on all 68 of Baltimore’s offensive snaps. Tyre Phillips started at left guard but was carted off the field with a knee injury after 29 snaps. Ben Powers replaced Phillips, playing the final 39 snaps of the game and Patrick Mekari saw six snaps serving as the sixth lineman in heavy personnel.