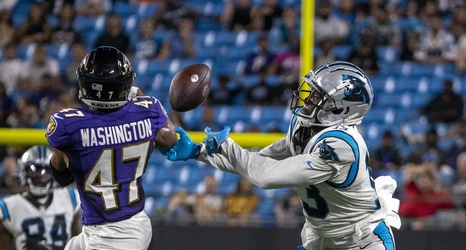 The offense looked particularly sluggish. Jackson missed several open receivers with passes that were too high or too wide. A few drops were mixed in. For a practice run at half-speed at times, the ball was hitting the ground far too often. It started early, too, when Jackson overthrew Moore, who had gotten behind Marcus Peters and the rest of the secondary and should have had a long touchdown. Jackson later overthrew a wide-open Gus Edwards out of the backfield and threw it behind an open Devin Duvernay in the middle of the field.