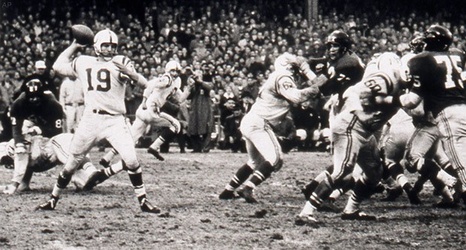 Talk about a unique piece of sports memorabilia.

A football thrown by Hall of Fame Baltimore Colts quarterback Johnny Unitas to Hall of Fame split end Raymond Berry for a touchdown in the classic 1958 NFL championship at Yankee Stadium sold for $62,140 last night at Huggins & Scott Auctions.

This wasn’t just any championship game. It’s commonly referred to as the “Greatest Game Ever Played,” ending with Alan Ameche’s 1-yard touchdown plunge in sudden-death overtime to give the Colts a 23-17 victory.

The game, which was broadcast to over 45 million people nationally, sparked the creation of the American Football League in 1960, which set the stage for the first Super Bowl in 1966.