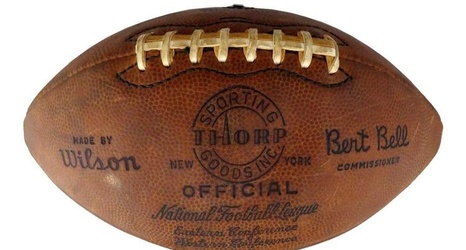 Got an extra $50,000? It might buy you the football that Johnny Unitas threw to Raymond Berry for a touchdown in the Baltimore Colts' 1958 NFL championship game. That pigskin goes to auction Monday and is expected to bring big bucks before online bidding ends Feb. 11.

The ball belongs to a sports memorabilia collector in Chicago, who bought it in 2003 from Berry, the Hall of Fame receiver and star of the Colts' 23-17 sudden-death overtime victory over the New York Giants. Berry caught a then-championship-record 12 passes that day in what has been called "The Greatest Game Ever Played.