Chargers vs. Ravens: 3 Things We Learned From Each Team 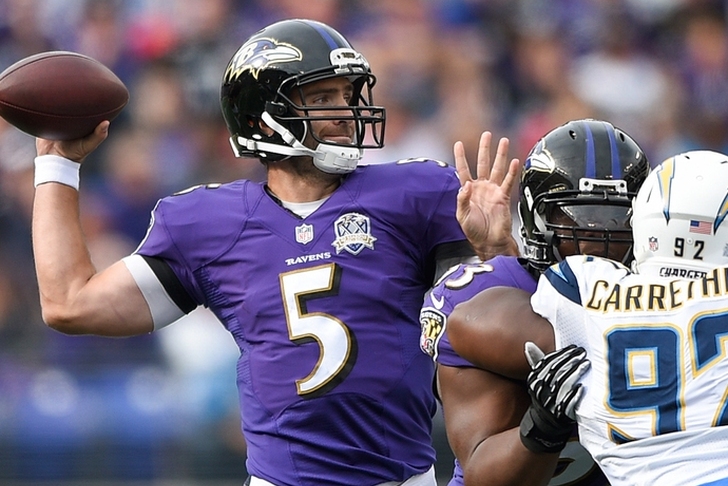 The Baltimore Ravens defeated the San Diego Chargers 29-26 in comeback fashion. The Ravens were down four, before taking a three-point lead with just over four minutes left. The Chargers tied the game before the two-minute warning, but Justin Tucker nailed a field goal as time expired to give the Ravens a win. Both squads are now 2-6. Here are three things we learned from each team in the Ravens' win.

1. Philip Rivers Is On Fire

Week after week, Rivers torches opposing defenses. Against Baltimore, Rivers completed 28 of 37 passes to 10 different WRs for 301 yards and 3 TDs. Few QBs are playing as well as Rivers is week-in and week-out. Despite his effort, it wasn't enough for the Chargers to pull out a win.

This has been an issue all season, and it was against the Ravens. Melvin Gordon did most of the damage, but still only recorded 54 yards on 18 carries. The Chargers need to find a way to get more from their running game.

In what is supposed to be his last season, Steve Smith's year is done after tearing his Achilles. It's a terrible way for Smith to end his career. Maybe, just maybe he'll try to return for one more season.

With the loss Smith, the Ravens are down to Kamar Aiken, Chris Givens and Jeremy Ross as the top WRs. For the sake of Joe Flacco's sanity, the Ravens have to sign another WR.

Had the Ravens lost, they'd be 1-7 with essentially no chance at making the playoffs. While the Ravens still have a crazy difficult battle to make the postseason, there is at least a glimmer of hope still left.