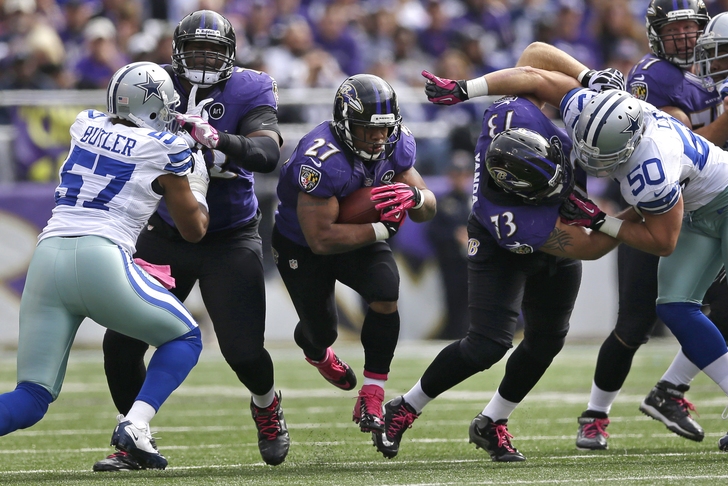 Answering questions from the media for the first time since learning of his two-game suspension for domestic assault, Baltimore Ravens running back Ray Rice did his very best to apologize for his actions while keeping his eye towards the future.

"My actions that night were totally inexcusable," Rice opened.

"I'm not perfect and I have a lot to work on," Rice added succinctly. The 27-year-old halfback repeated similar variations of this same sentiment over the span of a 10-minute plus press conference.

"I know a lot of people lost respect...that's my fault," he added. "I made the biggest mistake of my life.

Rice also apologized to his wife, Janay, for his role in a February dispute that ended with him being caught on camera dragging her out of a casino elevator in Atlantic City while she was presumably unconscious.

TMZ got hold of that video and posted in on their website, leading to many calling for Rice to banned from the NFL altogether.

"Any violence at all, especially man on woman, it's not right...It's just totally inexcusable," Rice said, aware of the ramifications of his actions both personally and publicly.

Rice also apologized to his teammates and the entire "Baltimore community" for letting them down, reiterating an apology to everyone affected by domestic abuse.

When asked about his thoughts on the suspension handed down by NFL commissioner Roger Goodell - a suspension that has been widely derided by many for its brevity - Rice put the focus back on himself and his own growth.

"I don't have any control over what the punishment was. I'm getting punished on a day-to-day basis...it's hurt more that I have to explain this to my daughter," Rice stated with notable emotion.

Seemingly much more composed and contrite than in his first press conference on the matter, Rice made it clear that he wants to shoulder the blame for his actions.

"I don't condone my behavior, I take full responsibility," he stated succinctly.

When asked if he had struck his wife before the events of this past February, Rice answered point blank that "it never happens. It's the first time it ever happened. I've never had a problem with domestic abuse."

Rice is aware that some fans and members of the NFL community won't believe what he has to say, nor will they forgive him for what he has done.

"I'm prepared for the worst, but that's something that I brought upon myself...I'm still going to go out there and be me. People think this is going to change who I am...it's not," Rice said.

Closing out his brief press conference, Rice again offered his "sincere apologies" to affected by domestic violence before quickly leaving the podium.