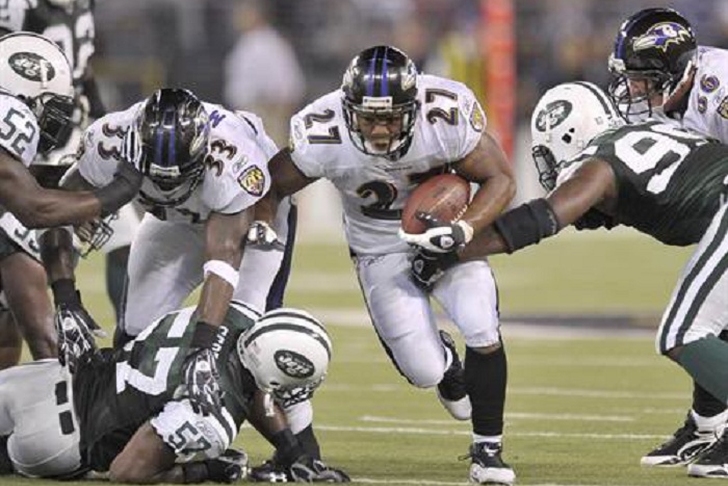 Earlier this week, New York Jets head coach Rex Ryan dared the Baltimore Ravens to try and run against his defense in today's game in Baltimore. And coming off his much-needed breakout rushing performance last week, Ravens running back Ray Rice is surely eager to accept that challenge today.

The Ravens (4-6) and Jets (5-5) will face off today at M&T Bank Stadium a week after both teams took tough losses in week 11. The Ravens couldn't hold onto a fourth-quarter lead and lost to the Chicago Bears 23-20 in overtime, and the Jets suffered a 23-point beatdown on the road against the division-rival Buffalo Bills.

The difference between these two losses? Even after taking a costly sixth loss on the season last week, Baltimore is feeling good about how they're playing in recent weeks, while the Jets now find themselves searching for answers after fading following a surprisingly successful start.

After going through 10 weeks of the NFL season dead last in yards per rushing attempt, and questions of the state of the Baltimore running game arising, Rice was finally able to put a solid day of running together. The Ravens' feature back, who had rushed for only 289 yards in eight games, ran for 131 yards and a touchdown on 25 carries last week.

And with the monkey off his back now, it's hard to imagine Rice is going to revert back to the version of himself that Ravens fans were unfortunately accustomed to through the first part of the season.

The loss in Chicago was particularly tough because, for the first time all season, the Ravens lost a game that they probably should've won. In their previous five losses, Baltimore was unquestionably outplayed by their opponents; but not last week.

And with a rejuvenated Rice leading the running game, it's hard to imagine that the Ravens offense will do nothing but get better and better down the stretch; especially since the defending Super Bowl champions will have to play superb football to reach the playoffs.

That road to the playoffs starts in today's game against the Jets. As of right now, New York holds the sixth and final playoff spot in the AFC. A win, however, would even the Ravens' record with that of the Jets, and do wonders for their playoff chances.

All signs point to the Ravens having the edge today. The defense is continuing to play excellent football, and has put constant pressure on quarterbacks, no matter how experienced. So its hard to imagine a struggling Geno Smith leading a questionable Jets offense to success against the Ravens' tenacious D.

Baltimore is 10-1 in home November games under the leadership of coach John Harbaugh and quarterback Joe Flacco. And this season, the Ravens are accustomed to playing in close games, leading the league with six games decided by three points or less. This team has been nearly unpredictable this year, so I'm not going to go against either of these trends today. Ravens 26, Jets 23.