Plain and Simple: The Packers played Ravens football better than the Ravens 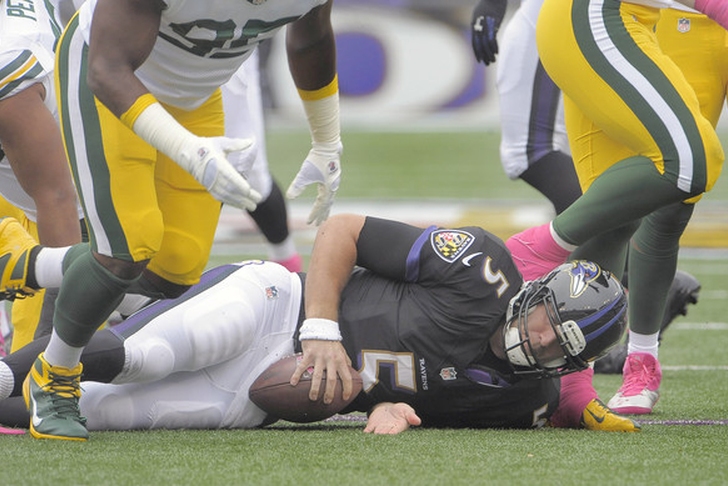 Okay, show of hands: Did anyone else think that the Baltimore Ravens and Green Bay Packers switched uniforms before Sunday's game? Because it sure seems like the Packers beat the Ravens at their own game in Sunday's 19-17 win.

I mentioned last week that I thought the pass rush would be the difference in this game, forcing one team to turn the ball over one or two costly times and hold a touchdown or two to field goals; and I was right.

It just turned out to be the other team.

Who knew that Green Bay would get to Joe Flacco more than Baltimore did to Aaron Rodgers? The Ravens pass rush was only able to beat Green Bay's offensive line, one which many considered to be the worst in the NFL, for 3 sacks Sunday.

Packer's linebacker A.J. Hawk had three sacks on his own, contributing to his team's total of five against a normally-stout Ravens offensive line.

That aside, this was still a game that the Ravens should've won; especially with their full supporting cast of receivers and both cogs in their two-headed running game all on the field Sunday for the first time since week one.

In front of 71,319 fans at M&T Bank Stadium, Flacco actually outplayed Rodgers in front of his home crowd. The Ravens' signal-caller threw for more yards (342 to 315) and touchdowns (2 to 1) than Green Bay's former league MVP. Rodgers also threw an interception, whereas Flacco did not.

Green Bay running back Eddie Lacy showed exactly why many saw tremendous pro potential in him while winning national championships with the Alabama Crimson Tide, while Ray Rice and Bernard Pierce were completely neutralized.

Pierce himself was especially unimpactful this week. The second-year back out of Temple carried the ball six times for just nine yards, and one of his runs netted 10 yards alone; so Pierce's other five carries Sunday netted a grand total of -1 yards.

One thing the Ravens have proved over the past couple of years is that if they're not rushing the ball effectively, things probably aren't going well that given Sunday. And that trend continued this week.

While they were able to give their backs enough touches to open the field up for some success in the passing game, the production was not enough for the Ravens to stabilize drives for the majority of the game. Baltimore converted just two of 14 third-downs in the entire game, and only one in their scoreless first half.

And one thing that has gone under the radar is the fact that, while all of the Ravens receivers were back on the field, the Packers did a fantastic job of shutting down the most dangerous one. Torrey Smith, who led all active wide receivers in yards (556) going into Sunday, was held to just 12 yards on one catch Sunday.

All of these factors went against the Ravens in their first home loss to an NFC team since 2006, yet they still almost overcame it all with a late push in the fourth quarter.

But its hard to win when your quarterback is sacked five times, the opponent outrushes you nearly three-to-one, your best receiver is M.I.A., and you can't score until 40 minutes into the game. Plain and simple.