Halftime Quick Hitters: Baltimore Leads Carolina 21-7 At The Half 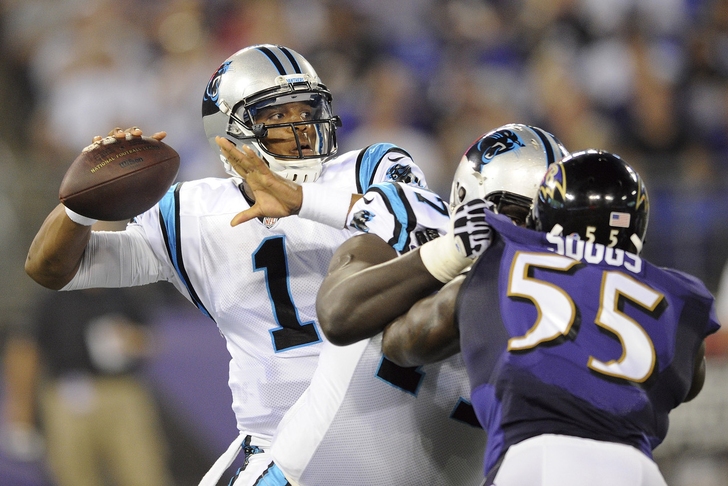 The Carolina Panthers (2-1) looked to bounce back from a deflating loss on Sunday Night Football against the Steelers, but former Panthers WR Steve Smith and the Baltimore Ravens (2-1) had other ideas in front of their home faithful.

Here's what we saw in the first half of this intriguing NFC/AFC clash.

A Battle Of Punts And Missed Opportunities Early: The Carolina Panthers' offense is well-known as a grind-it-out sort of operation, and the game's opening drive was a testament to that. The Panthers ate over seven minutes of clock on an 11-play drive to start things off. However, the trouble was that they only picked up 41 yards (less than 4 yards per play), along with being snakebitten by an offensive pass interference call on WR Kelvin Benjamin and a thunderous sack after breaking into the Ravens' red zone.

The Panthers would be forced to punt - a kick that set off a span of three straight drives between the teams ending in the ball being booted away.

Steve Smith Torches His Former Teammates: The former Carolina Panthers standout has been experiencing a renaissance of sorts with the Ravens, as he came into Sunday's game with a team-best 32 targets and the fantasy football numbers to justify those throws.

That only continued on Sunday, as Smith took advantage of a tipped ball off of teammate Owen Daniels and streaked 61 yards for an electric TD reception to give Baltimore an early 7-0 lead.

Carolina's sideline? They looked (justifiably) confused for a moment watching one of their former leaders burn them in such a way.

Cotchery And Benjamin Show Their Mettle: Minus Smith, Carolina's receiving corps has been written off by many as lacking the firepower necessary to stack up to the best units in the league.

Jerricho Cotchery and rookie Kelvin Benjamin thumbed their noses at that on Carolina's next drive, combining for three catches and 70 yards including a dandy of a 28-yard haul-in by Benjamin for a game-tying touchdown. Just for a moment, the Panthers could ask the question "Steve who?"

When It's Not Smith... It's Baltimore's running game that gets it done. Smith would pick up a 15-yard catch to open up the Ravens' next drive, but it was RB Justin Forsett's three rushes for 41 yards (punctuated by an 11-yard TD run off of right tackle) that was a story as Baltimore regained the lead at 14-7 with 5:29 left in the half.

The Former Panther Answers Emphatically: Did you blink? If so, you missed the last two plays and 50 yards of Baltimore's next scoring drive. After a Carolina three-and-out, WRs Torrey Smith (29 yards) and Steve Smith (21 yards) would push Baltimore back into the end zone. Steve Smith's catch gave him his second TD against his old teammates, and staked Baltimore to a 21-7 lead at the half.

Panthers Player of the Half: WR Jerricho Cotchery (4 catches, 75 yards)