Bengals Kick Their Way To 15-0 Halftime Lead Over Ravens 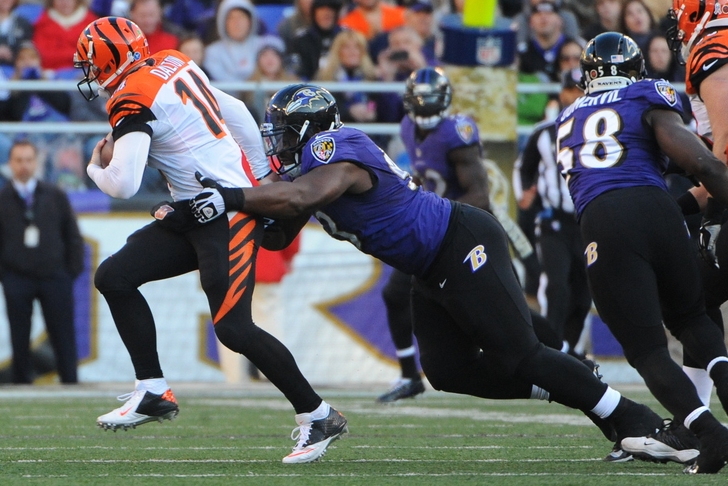 Old AFC North rivals renewed acquaintances to start the 2014 NFL season, as the Baltimore Ravens hosted the 2013 division champion Cincinnati Bengals in a pivotal opening statement game for both teams.

Far from turning on the jets right away, the Bengals and QB Andy Dalton slowed the pace down to a crawl to a start as they average under five yards per play on an 11-play, 4:35 drive - culminated with a 49-year old field goal by Mike Nugent.

The Ravens would use a 15-yard face mask penalty to pull themselves out of the shadow of their own end zone on the ensuing kickoff, but would be forced to punt it away after QB Joe Flacco failed to connect with Steve Smith on 3rd-and-4.

After the Ravens' 31-yard drive and a punt, the Bengals would also advance the ball 31 yards before punting - despite Dalton hitting TE Tyler Eifert on a 20-yard laser to open the possession.

Baltimore would sputter on offense on their next touch, as they picked up just three yards on three plays before punting it away to Bengals PR Adam Jones. Jones would streak into Baltimore territory on an impressive 45-yard scamper to put Cincinnati in business at the Ravens 29.

Dalton would lead Cincinnati all the way down to the Baltimore 4 before the drive hit a wall. Mike Nugent would split the uprights once again for the Bengals on a 22-yard kick to extend their lead to 6.

After yet another Baltimore three-and-out, Cincinnati would once again grind it out with a mix of short passes and Gio Bernard/Jeremy Hill runs. The Bengals would be forced to settle for a field goal once again inside the red zone, however, as Nugent's 28-yard boot pushed the Bengals' advantage to 9-0.

Baltimore's offense would be given fantastic field position at their own 40 along with being aided by a 15-yard pass interference call. However, their forward progress would once again hit a wall. A 55-yard field goal by K Justin Tucker went wide right as the Cincinnati shutout remained intact.

The next five minutes or go would reinforce the notion that Mike Nugent is a dang-good fantasy kicker to have by your side. Nugent would tack on a 46 and 38-yard field goal (the second coming after a fumble by Ravens RB Bernard Pierce).

Baltimore would finally put it all together with a double-digit play drive into the Cincinnati red zone, but Joe Flacco would be sacked with time expiring to squash the Ravens threat and send them into the locker room at a 15-0 deficit.