5 Things We Learned From Baltimore's 38-10 Victory Over Carolina 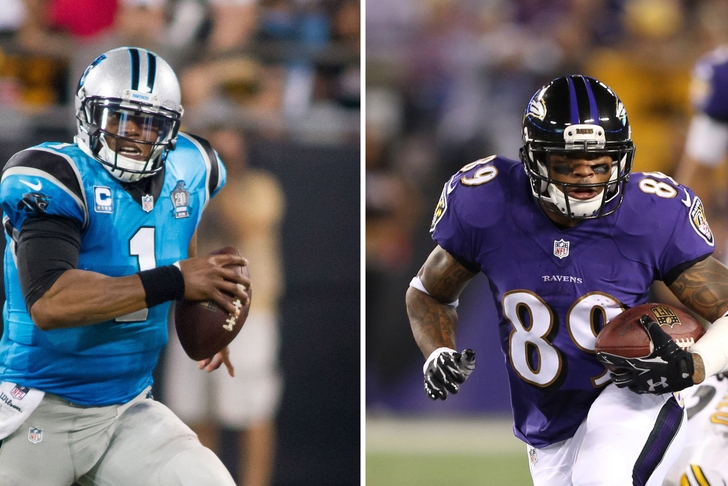 Steve Smith took full advantage of the opportunity to face his former teammates in Carolina, with the now-Baltimore WR amassing over 100 yards receiving and 2 TDs in the first half. That was the difference in the Ravens' 21-7 halftime lead over the Panthers.

Things only got worse for the Panthers in the second half, as problems on both sides of ball were too much to overcome in a humbling 38-10 loss.

Here's 5 things we learned from this one.

5. The Smiths Ruled The Day

The talented Smiths of the Baltimore Ravens wide receiving corps combined for just under 60% of the team's scoring output and over 60% of the total passing yards picked up by QB Joe Flacco (who had a stellar day). Steve Smith's amazing day against his former team was huge, but if Torrey Smith gets it going as well, the Ravens could very well be unstoppable in October-December.

In Weeks 1 and 2 versus Tampa Bay and Detroit, Carolina's defensive corps played lights-out ball while giving up just 21 combined points in two Panthers victories. Weeks 3 and 4? 65 combined points allowed to the Steelers and Ravens, and two losses to drop their record to 2-2. It's been a Jekyll and Hyde year for the D so far and it's cost the team dearly.

Baltimore's defense has been solid, if not spectacular at times, all year long. On Sunday, it was the run defense that did the trick and did it well. The Ravens boxed in Cam Newton all-day long and forced him to function as a more traditional passer. Couple that with underwhelming days for RBs DeAngelo Williams and Darrin Reaves, and Carolina was stuck with a one-dimensional attack.

Baltimore's elimination of running lanes was to thank for that, and it was also one of the major keys to the Ravens' victory altogether.

2. If The Panthers Can't Cam, They Can't Win

With Cam's legs a non-factor (2 rushes, 7 yards) for the majority of the day and his efficiency in the passing game (14-of-25, 197 yards, 1 TD) lacking, Carolina's offense looked substandard for a good chunk of the afternoon. If Cam can't release himself from an opposing defense's constraints and use his athleticism to his advantage, the Panthers struggle. Today was a prime example of that.

The AFC North could very well have a clear-cut favorite before the season's final two months, with the Ravens and Bengals' rematch slated for October 26th in Cincinnati. If the Ravens can return the favor after suffering a 23-16 defeat to Cincy in Baltimore in Week 1, they could very well seize control of the division.

Lose and a lot of the good that has been provided by this three-game winning streak could go by the wayside.