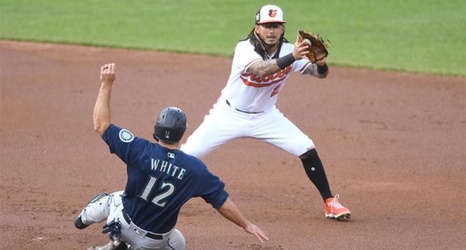 Mitch Haniger became the first Seattle player to homer out of the leadoff spot in both ends of a doubleheader, hitting a tiebreaking drive in the second game that led the Mariners over the Baltimore Orioles 2-1 Thursday for a sweep.

Haniger’s fifth-inning homer to left-center off Bruce Zimmermann (1-1) broke a 1-all tie and gave him four home runs this season.

J.P. Crawford hit a tiebreaking, two-run double in the sixth inning that lifted Seattle to a 4-2 win in the opener --- a fitting score for Jackie Robinson Day.

Seattle won three of four from Baltimore and went 5-2 on a trip that included a stop in Minnesota.