What the Orioles would look like if the season started today 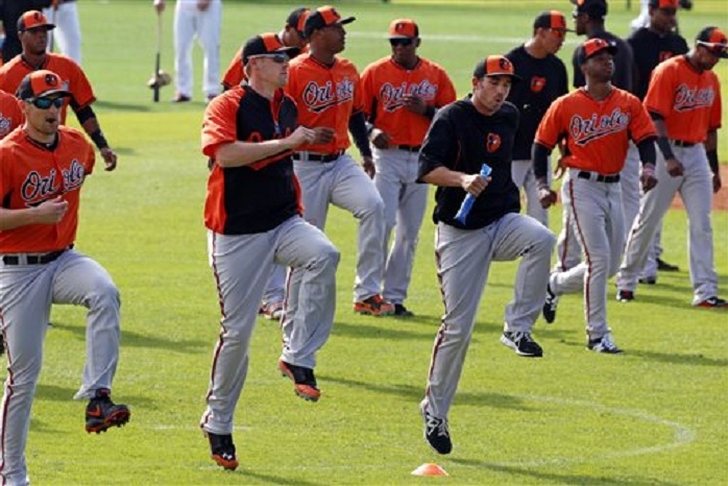 With spring training underway, the start of the 2014 MLB season is inching closer and closer. March is upon us, which means we're less than a month away from the Orioles' opening day, March 31.

After a winter that was disappointingly quiet up until two weeks ago, Baltimore made their presence felt in the free-agent market, signing starting pitcher Ubaldo Jimenez and the power-hitting Nelson Cruz.

We all know that spring training brings competition, especially with a skipper like Buck Showalter at the helm. But with that in mind, if the Orioles took the field tomorrow, what would the team look like?

The Orioles arguably had the best lineup in the American League East before they added Nelson Cruz, who brings a threatening presence to the DH spot that was missing from the Orioles' other options.

And with that hole filled, the majority of the starting positions are, for all intents and purposes, locked up. The two exceptions are in left field and at second base.

I penciled Baltimore newcomer David Lough into the starting lineup in left field, but expect this spot to be a platoon shared between Lough and Nolan Reimold. If Reimold is healthy (which, let's face it, is by no means a sure thing), then he and Lough should split time in left field until one of them proves to be the better everyday option.

Lough bats from the left side of the plate and Reimold from the right, so matchups will most likely dictate who plays on which day, at least for the start of the season.

And with Brian Roberts now a member of the New York Yankees, the only other question mark in the starting nine is at second base. Rumblings coming from O's spring training in Sarasota, Fl., seem to indicate that, as of right now, Ryan Flaherty will get a chance to win the job. But a good spring from Oriole prospect Jonathan Schoop (who the team is extremely high on) or offseason acquisition Jemile Weeks could change that.

Spring training is vital in the construction of a good bench, so this list could easily contain totally different names by the time the Orioles migrate back to Baltimore from Sarasota. There will be a lot of quality players looking to land a supporting role on this team come Opening Day.

Like I said before, I fully expect Reimold to be on the Opening Day roster if healthy. And while young backstop Johnny Monell will be given a chance to prove himself this spring, it seems a safe bet that Steve Clevenger will be Baltimore's backup catcher to start the season.

Then there's the case of Michael Almanzar. He's a corner infielder that the Orioles took in this year's Rule 5 draft, and is a hitter who shows a lot of promise. The only problem he presents is that, since he's a Rule-5 pick, he must either stay on the 25-man roster all season long or be released by the Orioles.

That means that the minor leagues are not an option for the O's when it comes to Almanzar; it's either keep him on the big-league team or let him go. And if the past is any indication, the Orioles will give Almanzar every chance they can to stay with the club, as they have with past Rule-5 selections (Ryan Flaherty, T.J. McFarland).

So, unless he has a horrendous showing this spring, expect Almanzar to be on the O's bench, whether he's the best option or not.

And if Flaherty does indeed get the nod as the starting second baseman, then Schoop and Weeks will find themselves competing for the backup job. Schoop has been in the Orioles' farm system for years, and made an impression in his one week in the big leagues last year in September. I would think its his job to lose, but Weeks does pose a legitimate threat if he has a better spring.

And while some clubs carry a five-man bench, the Orioles tend to keep only four position players on the bench in order to allow for an extra arm in the bullpen. This means that guys like Weeks, Alexi Casilla, Delmon Young, Henry Urrutia, Steve Pearce and Francisco Peguero could be on the outside looking in when it comes to making the major-league roster.

The Orioles have done an excellent job of putting together a roster of young and talented pitchers. And the recent signing of Jimenez ensures that some of the arms that may not necessarily be ready for a spot in the major-league rotation don't have to be relied on until they're truly ready.

While Jimenez is a veteran and perfectly capable of being the number-one starter on this staff, I don't see Showalter refusing to hand Chris Tillman the ball on Opening Day. After the solid 16-win season Tillman had in 2013, he's earned the right to be the guy at the top of Baltimore's rotation.

The first three pitchers listed above seem to be locks for this year's starting rotation. And as long as Miguel Gonzalez's minor back problems don't keep him from having an acceptable spring, he too should be one of the starting five.

That leave's the number five starter spot, which brings an intriguing competition. Going into spring training, it would seem to be Bud Norris' job to lose. He spent his entire time with the organization—after being acquired at the trade deadline—as part of the major-league rotation, and is the O's best option as the fifth guy when he's on his game.

There won't be a shortage of pitchers throwing their hats into the ring for the fifth spot, though. Kevin Gausman, Brian Matusz, Zach Britton, Steve Johnson and Korean veteran Suk-min Yoon are all expected to be given a chance to show what they have to offer the rotation.

Unless one of them has a considerably better spring than Norris, it just makes sense to give him the spot, at least to start the year. Matusz will play a role in the bullpen, as he has the past few years. Gausman and Britton can start the year at the top of the Triple-A rotation. Johnson could get one of the final spots in Baltimore's bullpen, start for Norfolk, or pitch out of their 'pen. And Yoon can perhaps earn a spot in the O's bullpenor get more experience pitching in the states down at Triple-A.

The bullpen will play a huge part in how successful the Orioles are in 2014. There are plenty of questions to be asked of this group, and we won't get the answers until they take the field.

Tommy Hunter has a vital transition to make as he moves into the closer role. Darren O'Day will have to be a consistent set-up man, and Brian Matusz is going to have to step up and be able to get lefties out consistently. It seems that five of the seats in the bullpen will be occupied by these three, along with T.J. McFarland and Ryan Webb.

That leaves two open spots, most likely. There is a plethora of arms that will vie for those slots, and the performances of those arms in the next month will dictate who gets them. My frontrunners would be Johnson and Yoon. They both have bullpen experience, and should be favorites for the spots if they have good springs.

I think that Gausman and Britton are both better pitchers than some of the names I've included in the bullpen, but that Baltimore—unless absolutely necessary—would much rather have those two starting games in Triple-A until a spot opens up in the major-league rotation.