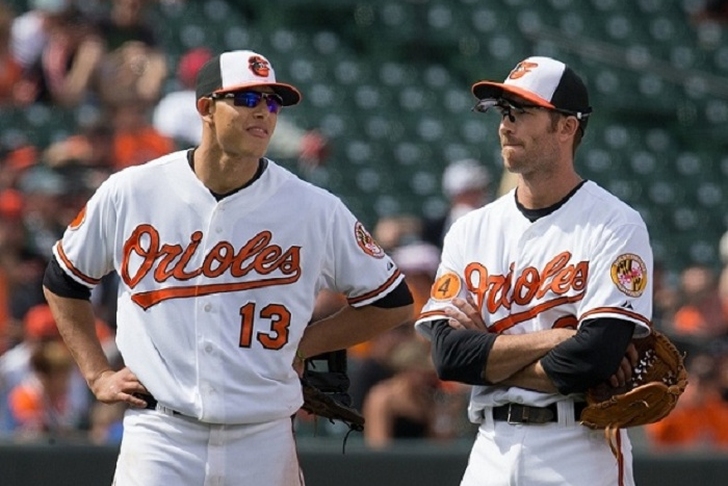 Three Baltimore Orioles were announced as winners of a 2013 Gold Glove Award Tuesday night, recognizing them as the best fielders at their positions in the American League. Manny Machado won the award for third basemen, J.J. Hardy took the shortstop's award, and Adam Jones was the center field recipient.

Machado won his first career Gold Glove in this his first full season in the Major Leagues, and is the first Orioles third baseman to win the award since Brooks Robinson won the honor 16 (yes, 16) consecutive (yes, consecutive) times from 1960-1975.

Both Hardy and Jones are receiving the accolade for the second-straight year, becoming the first pair of American League teammates to do so since a duo of Seattle Mariners won back-to-back Gold Gloves in 2007 and 2008 (Ichiro and Adrian Beltre). This is Hardy's second time winning the award in his career, and Jones's third time.

2013 also marks the second-straight season that the Orioles have had three Gold Glove winners; catcher Matt Wieters received the honor last year, along with the aforementioned Hardy and Jones.

The announcement of winners came four days after it was announced that an MLB-leading six Orioles were selected as finalists for the award; Baltimore backstop Wieters, slugging first baseman Chris Davis and right fielder Nick Markakis were all selected as final nominees at their positions in addition to the three O's winners.

Wieters and Davis were both beat out by a pair of Kansas City Royals, as catcher Salvador Perez and Eric Hosmer won the awards for their respective positions, and Markakis fell short of his second career Gold Glove honor, as Red Sox right fielder Shane Victorino received the award for the fourth time instead.

Nevertheless, the three winners and six overall finalists are proper recognition of a 2013 Baltimore defense that was not only the best in baseball this season, but one of the best team defenses in MLB history. This season, the Orioles set all-time Major League records for fewest errors (54), most games without an error (119), and highest fielding percentage (.991) in a season.