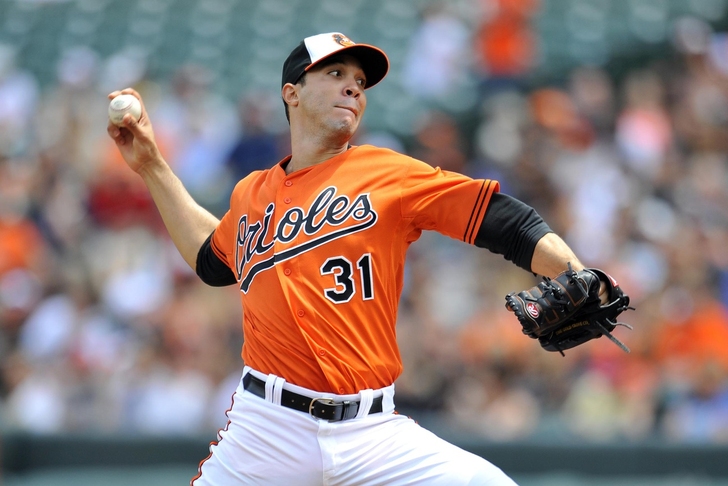 Former Rangers slugger Nelson Cruz welcomes his old team to Camden Yards, as the Baltimore Orioles do battle with the Texas Rangers in a four-game series beginning on Monday.

After losing eight straight, the Rangers picked up a much-needed series victory at home against the Twins this weekend. However, Texas remains 14 games out in the AL West and 6.5 games behind Seattle for the second AL Wild Card.

The Orioles stumbled against the AL East cellar-dwelling Tampa Bay Rays this weekend in Baltimore, losing three out of four. With division-leading Toronto skidding themselves, though, the Orioles remain in second place and just 1.5 games out of first.

It's been a singles parade in Arlington this June, as the club's 60 extra-base hits rank them just 26th in the Majors.

On Baltimore's side, while the Orioles have 74 extra-base hits to their credit, they're one of just two teams (along with the New York Mets) without a triple on their June stat sheet.

While the Rangers struggled at points during their recent six-game homestand, third baseman Adrian Beltre was not the reason for said difficulties.

In fact, Beltre's six-game stretch might be one of the better ones you'll see in baseball this season.

Per John Henry of Yahoo! Sports, Beltre went 12-for-2o against the Tigers and Twins, adding two doubles, one home run, and seven RBIs in the Rangers' frustrating 2-4 week in Arlington.

While the power might not fully be there, Beltre is still raking this year - enough to warrant strong consideration for inclusion in July's All-Star Game.

If there's one thing which has plagued starting pitcher Ubaldo Jimenez this season in his first year with the Orioles, it's walks.

Jimenez's 1.45 K/BB ratio this season is the worst of his career, and he has walked more batters (22) than he's struck out (18) during the month of June.

Ubaldo looks to get his control in order in Monday's series opener with the Rangers, squaring off against another pitcher struggling with his command - Texas' Joe Saunders.

Saunders has walked 18 and struck out just 20 in his past five starts, and hasn't gone farther than six innings in a game in 2014.

Tepesch threw 7.1 innings of three-hit, shutout ball in the Rangers' 5-4 victory over the Twins on Friday night - matching the longest outing of his short MLB career.

Tillman is coming off a pair of dominant performances himself, giving up just eight hits in 15 innings of work in decisive victories over the Yankees in the Bronx and at home against the Rays.

What They're Saying About the Rangers:

Choice done in by sinkers in key situations (ESPN)