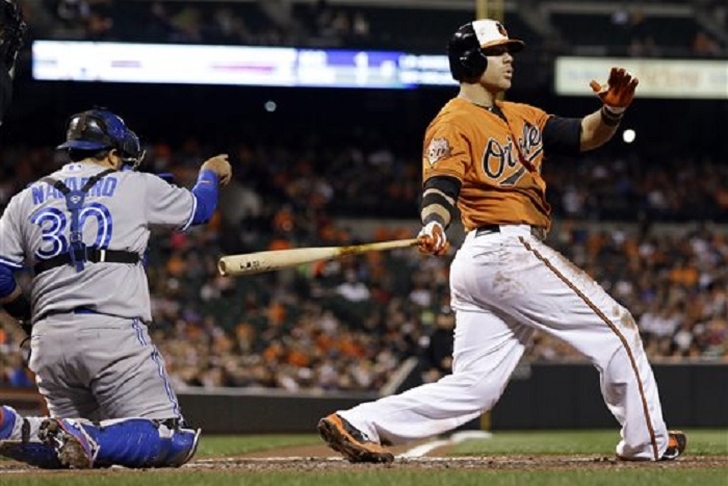 July is upon us, and the Baltimore Orioles sit just one game back of the Toronto Blue Jays in the American League East. But at just five games above .500 with a record of 44-39, the O's are playing far from perfect baseball.

What does Baltimore need to address to ensure that they're in the thick of the playoff race come September?

Who's in and who's out as far as the starting rotation is concerned?

The Orioles' rotation has been pitching considerably well as a unit as of late. However, a problem is on the horizon with regards to having more arms than spots in the rotation.

It's safe to say that Bud Norris, Chris Tillman and Wei-Yin Chen have earned their spots in the starting five, and will continue to anchor the O's rotation. But after that, there are multiple starters who are looking to fill the fourth and fifth spots.

Ubaldo Jimenez, who pitched his best game of the year by far Monday against the Texas Rangers (8 innings, 4 hits, 8 strikeouts, 1 walk, 0 earned runs) is most likely going to be part of the rotation for the rest of the year as well; as long as he leaves his control problems and subsequent lack of success in the past.

The Orioles signed him to a big four-year contract in the offseason, and they've let him pitch through his disappointing first few months without removing him from the rotation. So it looks like Buck Showalter is going to keep Jimenez in the rotation barring an epic collapse.

That leaves one spot in the rotation left open, with Miguel Gonzalez and Kevin Gausman to fill. Gausman has looked solid since being added to the rotation in June, including time when Gonzalez was on the disabled list. On the other hand, while Gonzalez has not been consistently impressive this year, he's also not necessarily pitched poorly enough to justify taking him out of the rotation just yet.

If the O's have to make a choice, the logical one would be to keep Gausman in the rotation, as he has been impressive since joining the team and is expected to be an ace on the staff for years to come. Gonzalez started his Oriole career in the bullpen, and could add another viable option if moved back.

Also, we can't forget about Dylan Bundy. He's expected to be ready to join the Orioles, if the team chooses, sometime soon after the All-Star break. Where does he fit in this mix if he's called up?

With Matt Wieters out for the year, do the O's need to add another bat?

Matt Wieters undergoing Tommy John surgery and missing the rest of the 2014 season left Baltimore asking themselves multiple questions. The one that seems most prevalent, though, is with Wieters' production no longer in the O's lineup,  do they need to try and trade for a big bat?

The quick answer seems to be yes. Maybe the team wouldn't rush out and look for another hitter if Chris Davis wasn't in such a dry spell at the plate (We'll get to him in a minute.); but with his lack of production, Wieters' absence has been magnified.

The Orioles have a good lineup as is, but if they want it to be as daunting as it was supposed to be at the beginning of the year, the team needs to try their best to acquire a middle-of-the-order bat.

Is Caleb Joseph the starting catcher for the rest of the year?

The other major question that Wieters' injury has left the team is who would be doing the catching in his absence? Steve Clevenger started the year as his backup, and Baltimore traded for Nick Hundley in late May; yet it is Caleb Joseph that has been getting the bulk of the starts behind the plate as of late.

And while Joseph has done a serviceable job, the Orioles need to ask themselves if he is their starting catcher for the remainder of the year.

It appears that Showalter is willing to give Joseph every possible opportunity, as his bat has warmed up recently, he's made throwing out potential base-stealers his calling card, and pitchers have praised him for his ability to call a game behind the plate.

The Orioles should let Chris Davis play through his slump, right?

Last year he set the Orioles' team record with 53 home runs and was in the thick of the American League MVP race. But this year, Chris Davis is batting a measly .205, and has been in an exceptionally dry spell recently.

He's one of the best hitters in all of baseball when he's on his game, but at this point, how do Showalter and the O's move forward with the slugging first baseman? Do they continue to play him every day and let him work through his problems himself? Do they move him down another spot in the lineup? Do they sit him against certain lefties?

The Orioles are hoping that "Crush" Davis breaks out soon so that they don't have to even worry about any of these questions.

Can Baltimore move forward with Schoop and/or Flaherty at second base?

Second base has been a question mark for the Orioles since Spring Training, but the fact that we're still asking about it has to be discouraging.

Jonathan Schoop has been getting more starts at second base recently, with Ryan Flaherty seeing most of his time against right-handed starters. And while Schoop seems like the more viable option with more potential to succeed at this point, can the Orioles allow him to continue to provide mediocre production and start almost every day?

It seems like Schoop has been playing better than his numbers indicate, especially recently. Nevertheless, the young infielder from Curacao is batting just .227 with six home runs.

When watching Schoop, it seems like he is on the brink of putting it all together and becoming a consistent major-league hitter; and that's why he'll probably continue to get the bulk of the playing time at second base for Baltimore.