10 lies you're being told about the Orioles 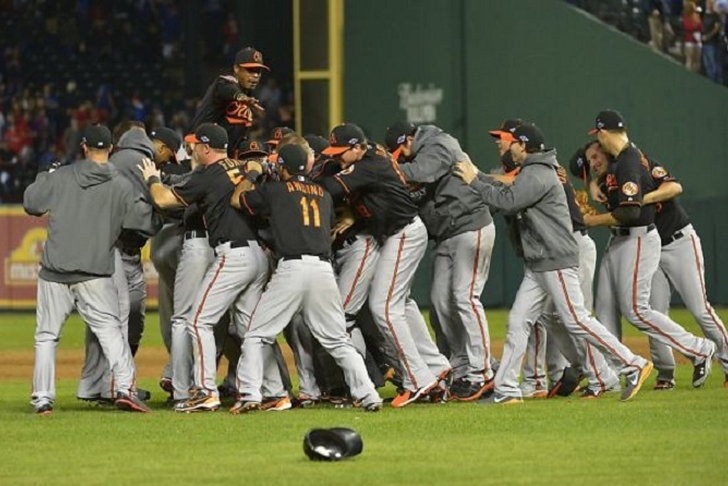 But there are some thoughts going around about the 2014 Baltimore Orioles that simply aren't true, and we need to set some things straight.

Only four pitchers in the American League won more games than Chris Tillman in 2013. The Orioles' Opening Day starter won 16 games last year in his break-out campaign, and has the stuff to both match and surpass that success in 2014. He can pitch deep into games, forget mistakes quickly and take over games. There may be better top-of-the-rotation options out there, but the young, yet experienced Tillman is a viable #1 option.

"Baltimore's rotation is too weak."

Will the Orioles have the best rotation in baseball in 2014? Probably not. But this group is vastly underrated nonetheless. Star power and name recognition may be lacking, but Baltimore's projected starting rotation includes five solid quality starters. The veteran offseason acquisition Ubaldo Jimenez will be slotted at #2 behind Tillman, and will significantly bolster the rotation if he can pitch like he did at the end of last season. Jimenez put up a 1.72 ERA over his final 12 starts down the stretch, winning five of his last seven decisions, and pitched to the seventh inning in each of his last eight starts.

Add a lefty who collects strikeouts like baseball cards in Wei-Yin Chen, a confident hurler who gave up just over two earned runs per start against the AL East last year in Miguel Gonzalez, and a fifth starter who was the #1 option on another team's staff last year in Bud Norris.

"Manny Machado starting the year on the DL is going to hurt this team."

Machado may be the most important piece in the Orioles' immediate and long-term future (and is my favorite Oriole, personally), so it's understandable that a major injury, an offseason surgery and a stint on the disabled list to start the season would scare some people. But don't fret, Machado should only miss the first few weeks of the season and be back on the field at Camden Yards sometime in April.

And while he's gone, Ryan Flaherty, who was expected to start the season as the O's second baseman anyway, is expected to fill in at third base. That leaves heavily-touted prospect Jonathan Schoop to man second base and ultimately take Machado's spot in the lineup while he's getting healthy. Machado will be missed, yes, but Baltimore can fill the void short-term very soundly. And one major factor that's being overlooked this spring is that, other than Machado's setback, the Orioles are very healthy.

I'm not saying we should expect a repeat performance from him. But when you think about it, why couldn't he? Last year, he batted fifth in the lineup behind Adam Jones for the majority of the season. This year, he'll most likely bat third or clean-up, which means he'll be protected by Jones or Nelson Cruz. With a big bat waiting on-deck behind him, Davis shouldn't be pitched around nearly as much as he was last year, given the protection that he didn't really have in 2013.

Even if Davis doesn't put up the same numbers he did last season, it's no problem. Because he doesn't have to. The O's offense as a whole is poised to be even better than they were in 2013, and "Crush" will have another great season even if his stats aren't as lofty as they were last year. And there are reports coming from Orioles camp that Davis has added more muscle and gotten even stronger. Yikes.

"Matt Wieters hasn't lived up to his hype."

Well, it doesn't help that he was being promoted as a guy that was going to be one of the best all-around catchers the game has ever seen while he was still in the minor leagues. Nevertheless, Wieters has shown numerous flashes of the greatness he has the potential to reach. While his place among the all-time greatest catchers is nowhere near earned yet, Baltimore's all-star backstop has been one of the game's best catchers since he came into the league. But coming off his worst season as a pro in 2013, many are starting to doubt if Wieters will live up to what he was supposed to be.

Entering his fifth full season, Wieters has been asked to bat in the heart of the Oriole lineup for the better part of the last three years, probably before he was truly ready to be a consistent middle-of-the-order hitter in the majors. The expectations cast on him due to his spot in the lineup probably contributed a good bit to his disappointing 2013. But with the plethora of big bats in Baltimore this season, Wieters will be able to hit seventh in the lineup to start (a pretty good #7 hitter, if you ask me) and won't have to move up higher until he is comfortable.

And remember, he's playing for a new contract in the near future and will look to be paid as the game's top catcher (by the Orioles or someone else) when that time comes. That should motivate him to show everyone what he's truly made of.

"Nick Markakis is on a downward trend."

Like Wieters, Nick Markakis had his worst season to date in 2013. The O's right fielder posted his lowest career offensive numbers across the board while moving all around the lineup. He would bat leadoff one day, third the next, and sixth the day after that.

But going into this year, Markakis is expected to bat leadoff every day for the Orioles, and should return to his stellar form (.292 career average, 36 doubles per season), since he'll be able to settle into a specific role. And he's still arguably one of the game's best defensive outfielders, committing no errors in 2013. One bad year? Yes, by his standards (which are pretty high). But a downward spiral? Not at all.

"The Orioles have an unfilled void in left field."

Just because the team doesn't have one set-in-stone, everyday left fielder doesn't mean that there is a hole there. Nolan Reimold will start the year on the 15-day DL, but David Lough, who was going to get a good portion of the starts in left field to begin the season, has a great glove and a bat capable of playing nearly every day if need be. And outfield depth is not something the Orioles lack going into 2014. Henry Urrutia, Delmon Young and Francisco Peguero top that list, and could see time in left field during the season as well. Nelson Cruz should also see left field every once in a while to give another starter a day in the DH spot. This position is by no means a void.

"Second base is a weak spot for Baltimore."

There are three young options to play second base for the Orioles in 2014. One of them is bound to take a step forward and be a solid starting second baseman. With Ryan Flaherty spending most of his time at third base while Machado is on the DL, Jonathan Schoop should see plenty of time at second. Schoop has been one of the O's most impressive prospects, and has put together a solid spring. Once Machado is back, he and Flaherty could make an excellent right-handed/left-handed tandem at second base.

Beyond those two, don't forget about Jemile Weeks, who could also do a solid job if the opportunity presents itself. Don't throw a fit over Brian Roberts leaving either. Take a look at the amount of games he has played in the past few years and his numbers in those few games, and I promise you won't miss him.

"The young pitching won't help the O's this year."

The best part about Baltimore's pitching situation in 2014 is that the O's young pitchers won't have to be put into roles they're not ready for. Kevin Gausman and Zach Britton can start the year getting more experience in the bullpen, Steve Johnson and Suk-Min Yoon can see more playing time in the minors, and Dylan Bundy doesn't have to rush back from his Tommy John surgery until his arm is completely ready. Don't forget the name Eduardo Rodriguez either, even if you don't see him in 2014.

"The Orioles won't compete in the American League East."

This may be the biggest lie you hear about the Orioles, and while the number of people saying this is going down, there are still many who believe that this Baltimore team will not be able to keep up in the AL East. This division is always one of baseball's toughest, but all five teams are expected to be good this year, and four are believed to be playoff-caliber teams. Yet it seems like the Red Sox, Yankees and Rays are getting more love than the O's. Albeit, the Sox are the defending champs, the Yanks retooled thanks to having the best free agency period of any team, and the Rays have earned the reputation as a consistently solid squad.

But still, the Orioles deserve more respect. The pitching staff is the best it's been in recent memory, the rotation will be competitive, and the lineup is arguably the best in baseball, let alone the division. And don't forget the defense; Baltimore's historically outstanding defense from 2013 should be back in full force this year. Not only should the O's be considered a threat in the AL East, but they should be considered a dangerous team in the entire American League.