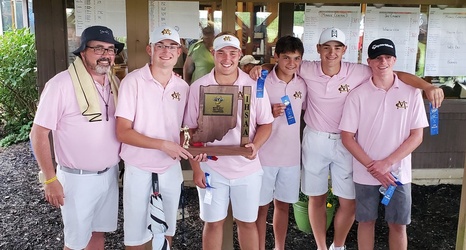 FARMLAND, Ind. — The rain that was constant enough to be annoying when the players teed off turned into a downpour minutes after the last golfers finished up their rounds during the sectional at Hickory Hills Golf Club.

But no amount of rain could dampen the spirits of Monroe Central's boys golf team, which had just won its first sectional since 2008. The Golden Bears shot a 307 and earned the top three individual spots to convincingly top Yorktown (324) and Delta (336) for the crown on their home course.

After a few pictures were taken, the shoes and socks came off as the entire team, including coach Shane Haney, jumped into the pond on Hole 3.