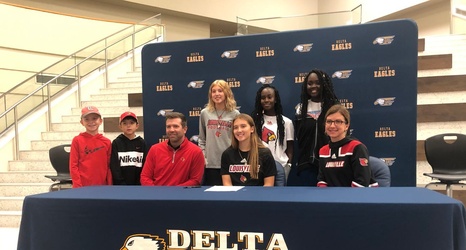 Wednesday's ceremony, held on National Signing Day, took place after school in the building's lobby. Her teammates, coaches, administrators and other Eagles athletes were in attendance, as well as family and friends.

Chester is the first Div. I girls soccer player in Delta's history. Her 201 career goals are a state record, she led the state with 115 points and 55 goals this season, and she's accumulated several state and national honors such as multi-time All-District, All-HHC and All-State selections, as well as being named the 2019-20 Gatorade Indiana Girls Soccer Player of the Year.