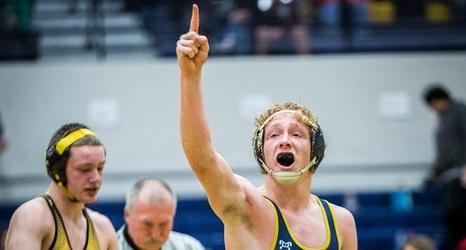 MUNCIE, Ind. — When Delta's Zach Morgan pinned Cowan's Keagan Keesling to claim his first sectional title, he immediately stood up on the mat.

The 152-pound senior was amped. He pointed to his coaches, who pointed right back at him as they all screamed in excitement. After being announced the winner, Morgan kept his hand pointed in the air as he walked off the mat, yelling as a champion.

Morgan handed Keesling, the same opponent who beat him a month earlier in the county championship, his fourth loss of the season. And he did it in 1:37.