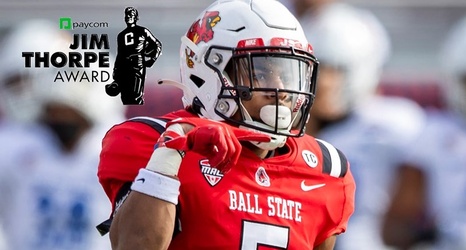 MUNCIE, Ind. - Bryce Cosby (Louisville, Ky.,/duPont Manual) of the Ball State football team becomes the second player on the Cardinals' roster to be recognized on a national level as the fifth year senior safety has been named to the preseason 2021 Paycom Jim Thorpe Award Watch List.

This list includes 40 of the nation's best defensive backs, representing 10 conferences and one independent. The preseason watch list is selected by a screening committee whose members compile a list of up to 50 players. This list is not final and players who have outstanding seasons may be added as the season progresses.