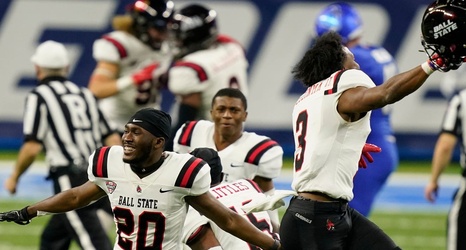 DETROIT — If Ball State football took anyone by surprise in 2020, it is unlikely similar success in 2021 will result in the same response.

According to the Mid-American Conference’s preseason media poll, BSU was selected as the favorite to win in both the MAC’s West Division and the conference’s championship game. Ball State earned 11 first-place votes and 114 total points to lead its division. Ball State earned seven votes to lead those picked to win the MAC title game.

Last year, when the Cardinals won the MAC and went on to win a bowl game during a 7-1 season, head coach Mike Neu’s squad was picked to finish third in its division.