Mick Schumacher out of Saudi Arabian GP after qualifying crash 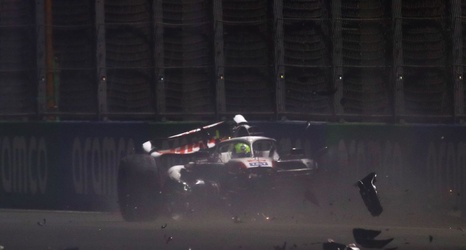 Mick Schumacher was ruled out of Sunday's Saudi Formula One Grand Prix after crashing heavily in qualifying and being flown to hospital in Jeddah for precautionary checks.

The 23-year-old German's Haas team said he would not participate in the season's second race despite being physically unhurt.

"There is a possibility that he'll have to stay for observation overnight at the hospital. Based on these facts and where we are, we have decided not to field his car tomorrow," team boss Guenther Steiner told reporters.

The next round is in Melbourne, Australia, in two weeks' time.

On Saturday, Schumacherwas taken by ambulance to the circuit medical centre after being extracted from the shattered car, which split in two when lifted on to a recovery truck, and then flown by helicopter to the King Fahad Armed Forces hospital.