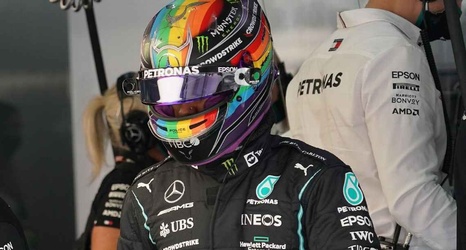 Seven-times Formula One world champion Lewis Hamilton has said he will wear his rainbow-coloured Progress Pride helmet at next month's Saudi Arabian Grand Prix as well as in Qatar this weekend to draw attention to LGBTQ+ intolerance.

The sport's most successful driver explained his stance after taking pole position for Mercedes in Doha on Saturday. Saudi Arabia and then Abu Dhabi are the final two races of the season.

"I will be using the same helmet through probably the last two races after this, or at least next week also," the title contender told reporters.

"On the back it says 'We Stand Together' and 'Love is Love' and it's important for me to represent that (LGBTQ+) community here as I know there are several situations which aren't perfect and need to be highlighted.