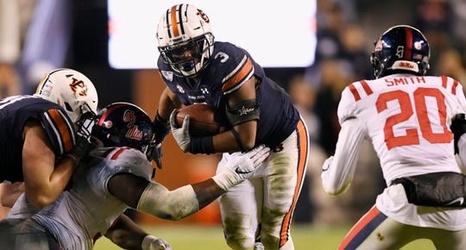 Auburn freshman DJ Williams scored his first career touchdown against Ole Miss Saturday with a little help from a friend. When the running back was bottled up on the goal line 6 foot – 7 lineman Prince Tega Wonogho picked up the 5-10 running back and spiked him into the endzone turf for the score.

Wanogho said, “I saw him right there and all I could think about was grab him and put him into the end zone. I didn’t mean to slam him though, but I’ve got to do what I’ve got to do.” I guess it was good he didn’t get called for spiking the player ball.