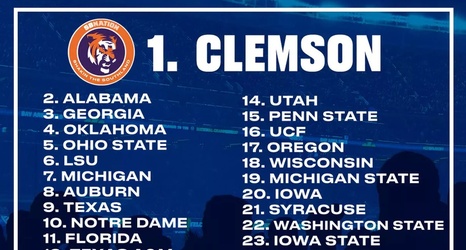 As much fun as week 1 was, nothing really happened in the top 10. For the most part, teams played severely overmatched opponents, and treated them as such. Luckily, this isn’t the AP Poll which is rigid for rigidity’s sake! Let’s see what happened in this week’s FanPulse rankings, voted on by YOU!

The top five stayed the same as last week, which shouldn’t come as much of a surprise. All five teams flexed their muscles as double digit favorites. LSU impressed with their new “Big 12 offense” behind the arm of Joe Burrow, and jumped up from 10 to 6.