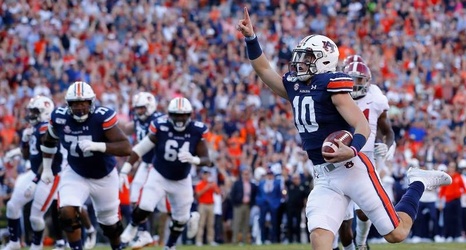 Alabama's quest for a College Football Playoff berth is all but over after the Crimson Tide lost 48-45 to Auburn in the Iron Bowl on Saturday at Jordan-Hare Stadium in Auburn, Alabama.

Since the playoff's inception in 2014, Alabama has qualified for the semifinals every year. That streak will likely end with the Tide suffering their second loss of the 2019 season.

Along with ruining the national title hopes of its biggest rival, Auburn now has Iron Bowl bragging rights for the second time in three years.