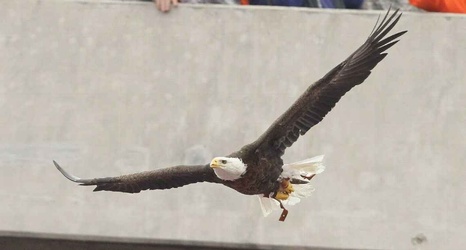 AUBURN, Ala. -- Auburn University is retiring its 20-year-old golden eagle mascot two years after it was grounded from flying at football games because of heart disease.

A university statement issued Friday says the bird named Nova is being replaced by another golden eagle named Aurea that will become War Eagle VIII.

A ceremony marking the transition is planned for Auburn's home football game against Samford University on Saturday. Nova has been sidelined since 2017 after being diagnosed with cardiomyopathy, which is a chronic heart disease.