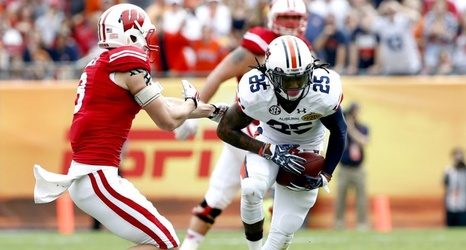 Auburn football TAMPA, FL - JANUARY 1: Defensive back Trovon Reed #25 of the Auburn Tigers intercepts a pass intended for wide receiver Jordan Fredrick #9 of the Wisconsin Badgers during the second quarter of the Outback Bowl on January 1, 2015 at Raymond James Stadium in Tampa, Florida. (Photo by Brian Blanco/Getty Images)

Everyone knew that when Gus Malzahn was fired from the helm of the Auburn football team there would be major changes to the program, changes that were long overdue. Bryan Harsin arrived on the Plains at the end of December and retained only one of Malzahn’s staff members before reloading the Tigers’ with his own staff and kicking off a reset of the program.