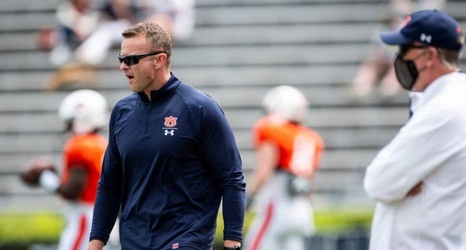 Heads were turned during Auburn football’s A-Day spring game on the Plains this afternoon.

The intrasquad scrimmage (that streamed on SEC Network+ at 1 pm central) was the first public coaching appearance of brand new head coach Bryan Harsin, who follows a seven-year stint for Gus Malzahn that ended in his mid-December firing.

It was quite the coming-out party for the Tigers’ new regime, which features almost an entirely fresh set of faces minus a few Malzahn-era holdovers like Cadillac Williams.