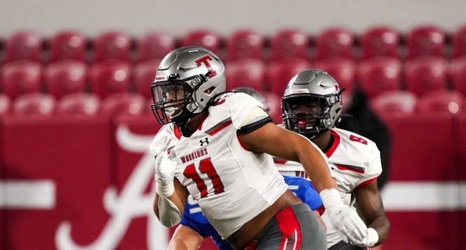 Thompson's Peter Woods (11) runs up to put pressure on the Auburn quarterback. Auburn High and Thompson High faced off in the AHSAA 7A State Championship on Dec. 2 at Bryant-Denny Stadium. [Photo/Hannah Saad] Tus Al Thompsonvsauburn7achampionship 3676

Many people have spoken highly of new Auburn football defensive line coach Nick Eason on the recruiting trail and the momentum continued as one of the top prospects for 2023 found his way to the Plains this week.

Peter Woods took an unofficial visit with his Thompson High School teammate Tony Mitchell this week, which marks the first visit for either prospect since Bryan Harsin and his staff arrived on the Plains.