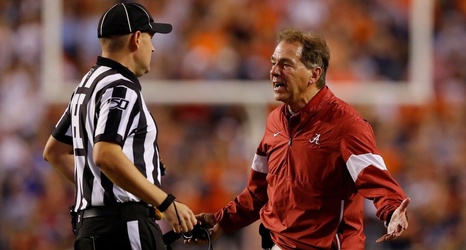 AUBURN, Ala. -- Alabama coach Nick Saban looked tired as he sat down for a postgame interview on Saturday night. The 68-year-old's eyes were heavy as a celebration roared just outside his locker room's doors in Jordan-Hare Stadium. He put a hand to his face and kept it there for a moment, rubbing his forehead as he attempted to explain a bizarre, procedural penalty that cost his team one last possession and one last chance to tie the game against Auburn.

He called the penalty for too many men on the field "unfair," wondering aloud whether his team was given enough time to substitute during a pivotal fourth down.