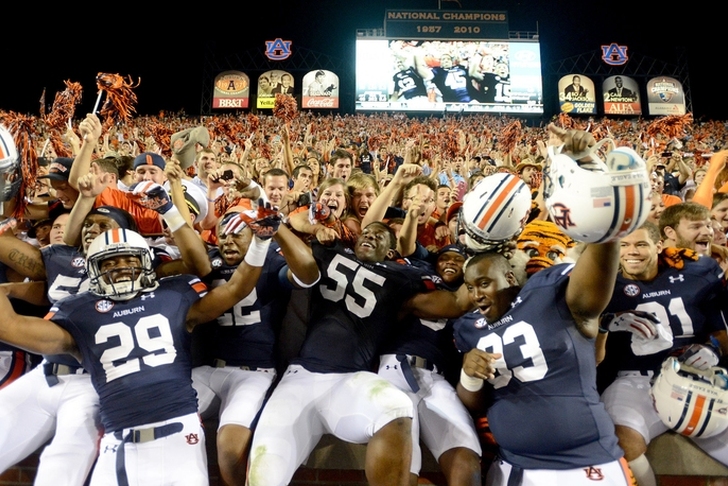 The Auburn Tigers did not play as well as they wanted in 2015. They posted a disappointing 7-6 record, although they did win their bowl game. While there is still plenty of talent, major QB questions won't help things. So will 2016 go better than 2015 did? Find out what we think with our game-by-game prediction of Auburn Football's record in 2016.

Clemson is fresh off nearly winning the national title, and return plenty of talent. It may be a home game for Auburn, but Clemson is winning this one.

Arkansas State is better than most Group of 5 schools, but this is a home game for the Tigers. Plus, they're an SEC program. Auburn will come out on top.

This is the first one that's close to a toss up. Both A&M and Auburn have talent, but have question marks at QB. Since Auburn is at home, we'll give them the nod.

Auburn is at home again, the fourth of five home games to start the year. But LSU is a national title contender. Leonard Fournette could have a monster game. LSU wins.

ULM won just two games last year and one of those was against Nicholls State. This is an easy Auburn win.

Auburn finally gets a road game in against MSU. But the Bulldogs are without Dak Prescott this year, which could hurt them. We'll go with Auburn.

On a neutral field or at home, I'd probably go with Arkansas. But the Tigers are coming off a bye and are the home squad, so they get the nod.

Ole Miss lost some big names, but Chad Kelly is back and this team has recruited really well. Ole Miss should come out on top, especially at home.

A home game against one of the bottom-tier SEC schools? Yeah, this is an Auburn win. In theory, this gets them bowl eligible as well.

This is another toss up. It's tough to figure out how Georgia will look this year, especially if they start true freshman QB Jacob Eason. But this game is in November and Georgia is at home. If Eason has settled into the starting role, the Bulldogs should be the favorite.

A three-win FCS school? This is an easy win.

Auburn REALLY wants to beat Bama each year, but they won't this season. It'll be close, as it usually is, but Alabama is the home and better team.