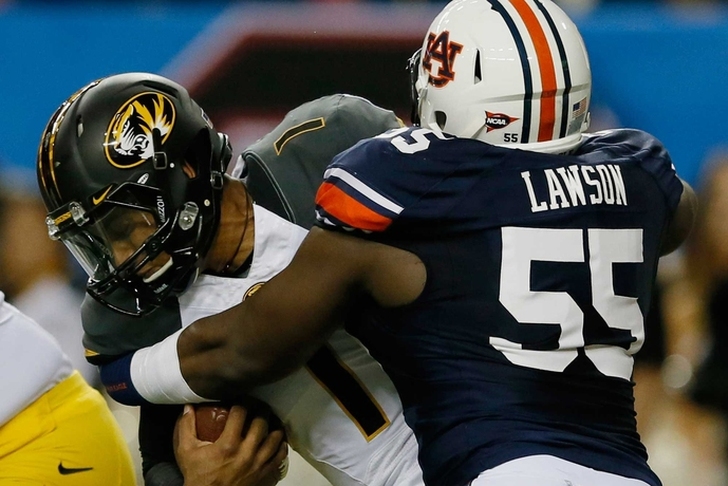 The Auburn Tigers (4-2) are trending up after wins over San Jose State and Kentucky, and they'll look to keep that momentum chugging forward during Saturday's road showdown at Arkansas. We're here to get you all caught up on the latest from around the program before then with our Auburn Tigers Football Roundup: The Latest Before Saturday's Game At Arkansas.

Carl Lawson On Track "On Schedule To Come Back"

Impact defensive lineman Carl Lawson hasn't been in uniform since suffering a hip injury in the season opener, but he may be back relatively soon.

Auburn defensive coordinator Will Muschamp said Wednesday that Lawson "is on schedule to come back," but he will not be dressed for Saturday's showdown with Arkansas.

"They've had him on the field, not practicing at all, but running and doing a lot of things with our staff," Muschamp said. "We'll continue to move forward with his situation."

Muschamp added "they haven't told me" when Lawson is going to return, "but we certainly expect him to be back, unless we have some sort of setback. That's why I don't want to come out and say a date and then 'well, what happened?' I think we're dealing with a situation that will be resolved soon."

Four-star West Palm Beach (FL) wide receiver Ahmmon Richards already made a trip to visit the Auburn Tigers back in August. The Miami Hurricanes commit's second visit will take place on Iron Bowl weekend when the Tigers host the Tide in late November.

Richards says he's still a solid Canes commit at this time. However, he wasn't shy when asked if Auburn is a contender for his services.

“I think so,” Richards said. “You never know in the recruiting process. I went up there once and really liked the environment. It’s like a family environment and that’s what I like."

DE DaVontae Lambert Getting His Confidence Back

Less than a year after surgery to repair a torn ACL, DE DaVontae Lambert is starting to round back into the form of the guy who led the Tigers with 3.5 sacks a year ago.

“I’m starting to get more confidence in myself than I had earlier this season,” Lambert said Tuesday. “It’s also showing in the games that I’ve been working on it in practice. I feel pretty good, getting close.”

Lambert is coming off his best two games of the season against San Jose State and Kentucky, totaling seven tackles in those two contests. The process is far from over for him, though.

“Certainly having been through ACL surgeries before with players, it sometimes takes a little confidence to get back in the swing, through the grind, going through the soreness, battling through the scar tissue through practice,” Will Muschamp said Wednesday.