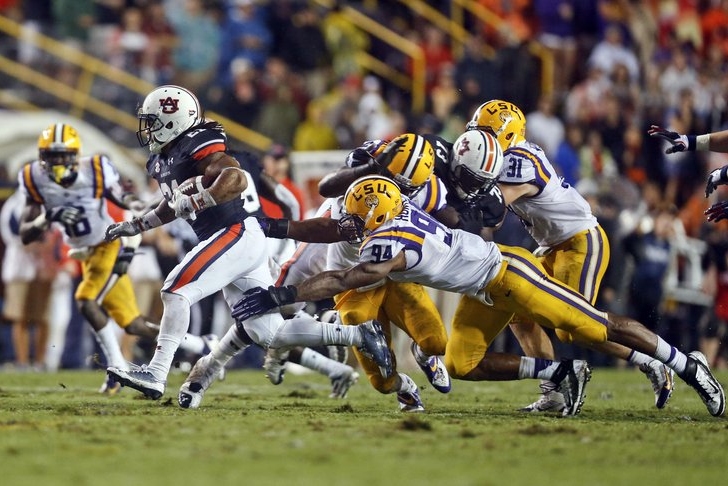 After a day full of nail-biters and major upsets, the #5 Auburn Tigers gave us our biggest surprise yet: a comprehensive blowout win over #15 LSU.

Auburn fans had every reason to be confident going into this game, but few would have expected to see their team leading by 34 in the fourth quarter.

With Nick Marshall conducting the show (14/22, 207 yards, 2 TDs passing, 16 carries, 119 yards, 2 TDs rushing) and standout performances from RB Cameron Artis-Payne and WR Sammie Coates, it was one-way traffic for Auburn's offense...and another dominant performance by the Auburn D (allowing 14.4 ppg on the year) locked this one up early.

LSU will want to forget this performance as quickly as possible. QBs Anthony Jennings and Brandon Harris did nothing to swing the QB battle one way or the other - Harris was terrible (3/13 for just 58 yards), and while Jennings was slightly better (5/10 for 84 yards), neither looks like the definitive answer for Les Miles' team.

Turning Point: LSU stayed in striking distance until early in the second quarter, when Nick Marshall found C.J. Uzomah for a TD pass to put Auburn up 24-7. The Tigers used that momentum to score 28 unanswered.

Key Stat: LSU did not convert a third down in this game, going 0/12 on the night. That won't win you any football games, and there's no excuse for such poor execution in a marquee game.

LSU MVP: We'll grit our teeth and give this one to punter Jamie Keehn, who got a real workout today. Keehn punted 8 times for 338 yards on the night.

What’s Next? Auburn's tough stretch of games continues, and they'll travel to Mississippi State to take on a team riding high after their win over Texas A&M. LSU will travel to Florida to take on Will Muschamp's Gators, who beat Tennessee today to move to 3-1 on the year.