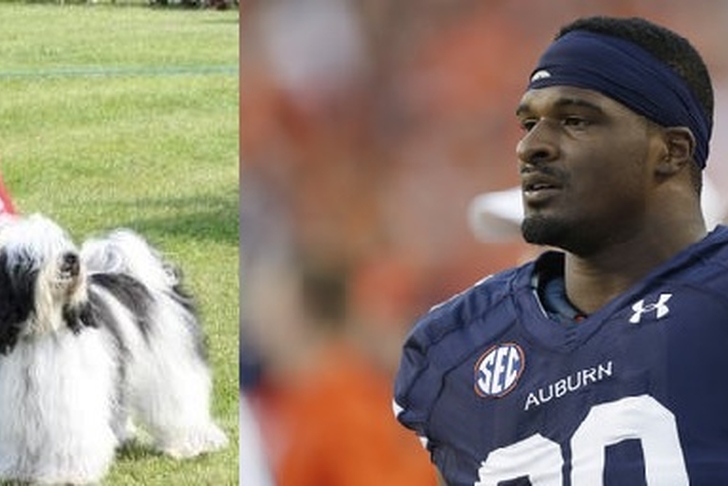 Will the real Dee Ford please stand up? In the weeks leading up to national signing day, hundreds of Auburn fans followed a certain @Dee_Ford on Twitter, believing it to be the recently-graduated Tigers DE. Little did they know, the player they were after was actually @Dee_Ford_, and they had just followed a British woman from Kent.

Ms. Ford was an excellent sport about the whole thing, which started back in January when the Auburn player tweeted a link to his Instagram account, which uses the exact same handle as Ms. Ford's Twitter account. At first, she was slightly put off by the confusion:

OK for those new followers who added me last night I AM NOT A SINGER. I AM NOT A FOOTBALLER. I am a boring (cont) http://t.co/wgns1kMKfW

She very quickly saw a silver lining in the situation, though - the opportunity to mess with draft analysts:

Despite her continued insistence that she wasn't an Auburn player, even news outlets started quoting her:

Slowly but surely, Ms. Ford started learning more about her namesake's alma mater, and Auburn fans were more than happy to give her the lowdown:

...and Ms. Ford started warming up to her newfound legion of accidental admirers:

OK I'm off to bed. It's late here, hope the party long continues in Auburn this evening 4u. You yanks are alright really! #WarEagle

After that, it didn't take long for Ms. Ford to get just as familiar with football as 3/4 of America:

now they're discussing Richard Sherman. Don't like his attutude. #toobigforhisboots

The real fun started on Wednesday, though, as Ms. Ford live-tweeted national signing day (you should definitely check out her timeline for the full experience):

oh no coach has fallen asleep! but who's Mr Orange Jumper and is he tweeting too? pic.twitter.com/jIIcPR4U7i

Ms. Ford agreed to a brief interview with us, which will be published later in the afternoon - check back later on for her strong takes on American football, the Auburn family, and, most importantly, Nick Saban.