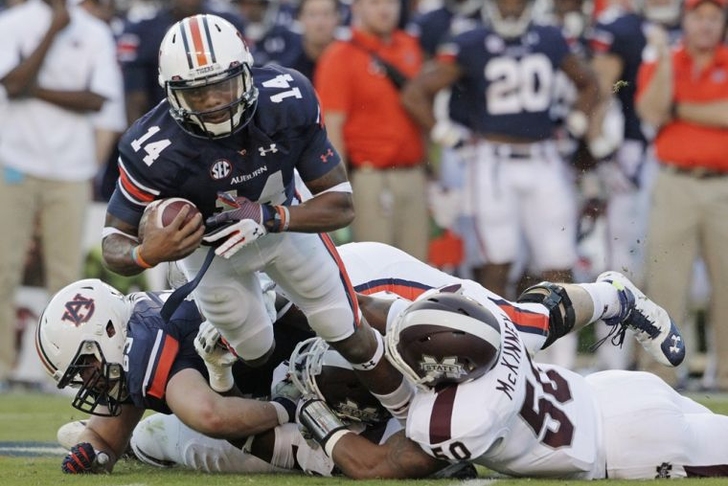 After a weekend that saw many of the top teams fall, Auburn was one of the few left standing in the aftermath.

They face another of those teams in Mississippi State, in a matchup that will be a statement win for whichever team comes out on top.

Key Stat: Mississippi State's Dak Prescott has totaled 19 touchdowns and over 1,600 yards of offense through five games. Nick Marshall has over 1,100 yards and 12 touchdowns, while missing the first half of Auburn's opening game.

Auburn Outlook: The Tigers sit at #2 in the nation after some big names fell over the weekend.

They will have to come up with one impressive run of wins if they are to hold onto that spot the rest of the year though. Starting against the Bulldogs, Auburn has a schedule that includes Ole Miss, Texas A&M and Georgia in the next month.

The Tigers look up to the task however, led by quarterback Nick Marshall, who has thrown for 755 yards and eight touchdowns with just one turnover. He has also added 392 yards and four scores on the ground.

Mississippi State Outlook:  The Bulldogs were an even bigger beneficiary to last week's wild outcome. They jumped nine spots up to the #3 position with a victory over Texas A&M.

Quarterback Dak Prescott has been great this season, throwing for 1,232 yards and 13 touchdowns with just two interceptions, adding six rushing touchdowns to that total.

He has been arguably an even bigger key the the Bulldogs offense than Marshall has been for Auburn.

What to watch for: Needless to say, this game will center around the offense - specifically the dual-threat quarterbacks running them.

Marshall and Prescott can single-handedly take over a game, and with them facing each other in this one, expect a lot of points to be scored.

What they're saying - Auburn:

Marshall over Prescott in duel of SEC's best qb's (AL.com)

Getting Coates back to full strength opens up offense (AL.com)

What they're saying - Mississippi State:

This game is going to be a shootout. Playing at home gives the Bulldogs the edge in a game that is otherwise even on paper.

Mississippi State has also pulled off back-to-back wins over top 10 teams, as they look to make it three straight against Auburn.