Auburn vs. Georgia Preview and Prediction 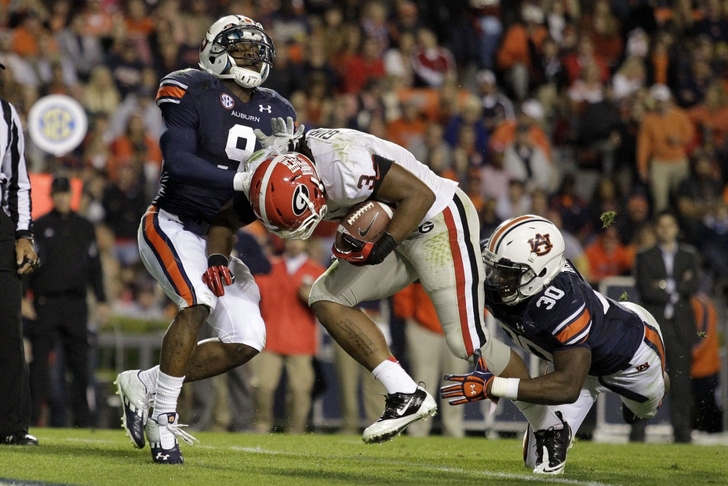 Auburn heads to Georgia looking to rebound after a devastating loss to Texas A&M last week.

This matchup lost some of its shine after Georgia and Auburn both suffered upset losses in the last two weeks leading up to this game, turning what was a top-10 matchup into a fight for survival in the SEC picture.

Auburn Outlook: The Tigers hopes of a playoff spot were likely shattered with a loss to the Aggies last week.

Auburn still comes into this game at #9, so while their season is not completely over, they are in desperate need of a victory against Georgia.

Quarterback Nick Marshall and the offense had two critical fumbles that sabotaged their comeback attempt. Marshall has still been on fire over the last three games, tallying 11 touchdowns.

Georgia Outlook: The Bulldogs will get Todd Gurley back for this game, although the offense has performed just fine without the star running back.

After losing to unranked Florida, Georgia was able to get back on track with a blowout win over Kentucky.

Despite being the only ranked team in the SEC East, the Bulldogs are still trailing Missouri by one game for first place in the division. A win over Auburn will go a long way to potentially catching up to Missouri.

What to watch for: Auburn doomed themselves by getting out to a slow start vs. Texas A&M. The same thing happened to Georgia in their loss to Florida. This game is going to be even more unforgiving for whichever team starts the game from behind.

Look for fast starts from both offenses as they try to avoid an early hole in a crucial SEC game.

What they're saying - Auburn:

D'haquille Williams has not practiced this week, Malzahn says (AL.com)

X's and O's: Who can stop this offense? (College and Magnolia)

What they're saying - Georgia:

The Tigers can get a win if they start out faster than they did against A&M last week. Auburn still has the upperhand offensively, and will look to capitalize on that advantage in a likely shootout.