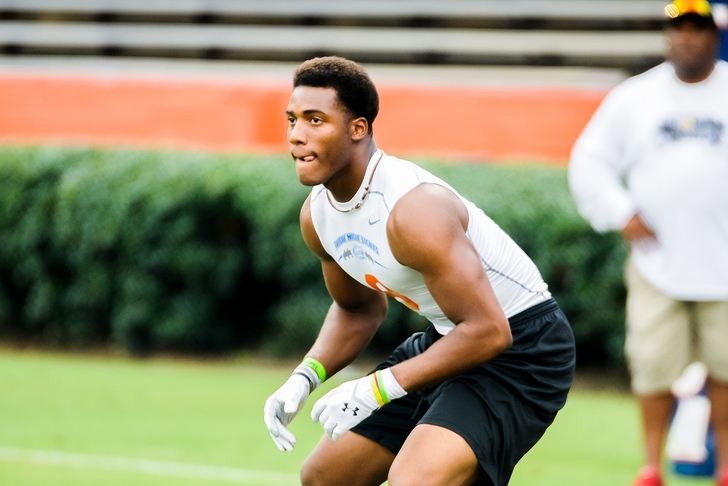 We're getting closer and closer to national signing day, but the Auburn Tigers are still waiting on a number of top prospects to make their decision. Let's take a look at the elite players who could still end up with the Tigers, and take a look at how likely they are to choose Auburn:

The #1 offensive lineman and the #2 overall player in the Class of 2015, Ivey will be a massive boost to whatever program lands him come National Signing Day. The Florida Gators are currently in pole position, but Auburn isn't out of the running just yet.

Cowart (pictured above) is the top defensive end in the Class of 2015, and most recruiting services have him ranked between 3rd and 7th out of all players in this class. Like Ivey, Cowart is considering Florida and Auburn, but it sounds like Will Muschamp's arrival as Auburn's new DC is giving Cowart plenty to think about. This one will go down to the wire, but based on Muschamp's impact, we're starting to think the Tigers have a very real shot.

The #1 CB in this class and the #4 overall player, Marshall is currently being chased by what feels like every single FBS school in the country. At the end of the day, though, USC (the one in LA, not South Carolina) is the heavy favorite.

Another 5-Star Florida DE, Jefferson is behind only Cowart in the state and national position rankings. Unfortunately for the Tigers, Jefferson is more likely to end up at Florida or Ole Miss than Auburn, and he made a surprise visit to that team from Tuscaloosa over the weekend that won't help his odds of ending up on Gus Malzahn's team.

Another DE, but this time from Georgia. Key is a 4-Star considering South Carolina, UGA, Auburn and LSU (reportedly in that order), and it sounds like a recent visit to South Carolina made a major impression. Most likely, Key will end up a Gamecock, but there's still time for that to change.

It's down to Auburn and Alabama for Wanogho, a 4-Star DE who stands at a towering 6'8. The Tigers are heavy favorites, and Gus Malzahn made a personal in-home visit to seal the deal over the weekend.

A 4-Star from Gator country, Holland is still believed to be leaning Auburn. Florida is definitely in the mix, though, and Ole Miss is making a late push to secure his signature. We predict he ends up a Tiger, though.

If we had to put money on who ends up in Auburn, we'd say Wanogho and Holland are the two locks, with Cowart at about 50/50. Marshall is the only name on this list that we think is totally out of range, though, and there's still time left for Gus Malzahn to make some moves on the players here that don't have Auburn at the top of their list. No matter how the chips fall, we're in for a very interesting National Signing Day.