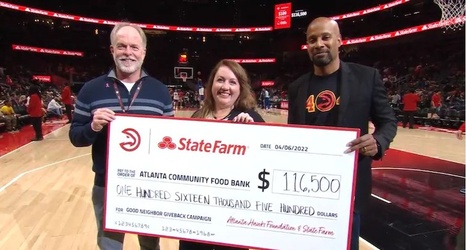 ATLANTA – During halftime of the Hawks’ last regular season home game, the Hawks Foundation and State Farm presented a check of $116,500 to the Atlanta Community Food Bank as an effort to help combat childhood hunger and fight against food insecurity throughout metro Atlanta. To continue the commitment, the Hawks Foundation and State Farm created the season-long, ‘Good Neighbor Giveback’ campaign. This campaign raised $100 for every point the Hawks scored over 100 in each game during the 2021-22 regular season (up to $100,000).

After reaching the initial maximum of $100,000 during the team’s game against New York on March 22, State Farm extended the campaign.