Falcons vs. Chiefs: a quick look at the series history 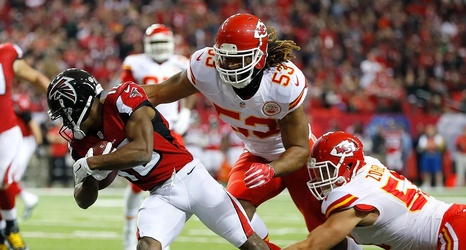 The Falcons and the Chiefs are two NFL franchises rapidly headed in opposite directions. If the Chiefs win tomorrow, they’ll clinch the AFC’s top overall seed. If the Falcons win tomorrow—never mind, that won’t happen.

The Chiefs currently lead this series, 6-3. The Chiefs took 5 of the first 6 games these teams played, but the Falcons emerged victorious in 2008 and 2012.

These teams last played on December 4, 2016, a narrow 29-28 Chiefs victory. The Falcons and the Chiefs traded rushing touchdowns in the first quarter.